Mercedes and Red Bull are provoking each other both on and off the track this season, with the intensity at the Qatar Grand Prix increasing again.. 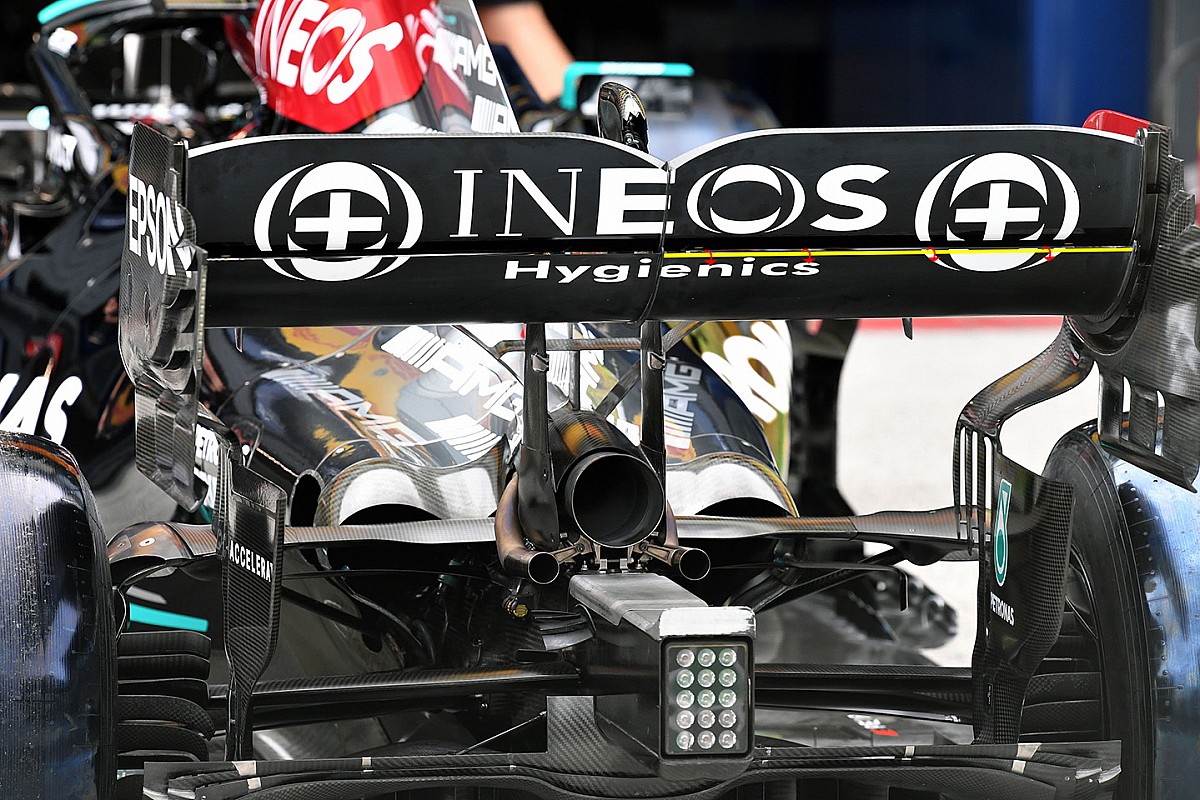 Mercedes and Red Bull are provoking each other both on and off the track this season, with the intensity at the Qatar Grand Prix increasing again when Christian Horner threatened to protest against his rival’s car.

Red Bull has already expressed its displeasure with the legality of the Mercedes rear wing several times and is convinced that the bitter rival will gain an advantage outside of the regulations.

Suspicions were fueled by pictures like below, which show obvious notches next to the main aircraft.

These alleged scuff marks may indicate that the main wing member is not rigid and instead is flexing up and down, although it could be emulsification from a dirty air stream.

Red Bull’s fear of the situation in Brazil heightened, with Lewis Hamilton getting past the penalties that demoted him in both the sprint and the main race.

“The straight-line speeds that we saw in Mexico and Brazil – I think everyone could see in Brazil was not a normal situation,” said Horner.

“And yes, a new Mercedes engine brings increased performance, but when you see witness marks on the end plates of the rear wings, marked by curved wings, at an approach speed of 27 km / h, it is very clear to us, what was going on.”

The speed advantage that Hamilton had in Interlagos was undeniably impressive and Mercedes saw itself excluded after qualifying due to a DRS error.

It should be understood, however, that the effect Red Bull fears does not affect the use of the DRS, but rather the flexibility of the main aircraft of the wing under normal operating conditions. 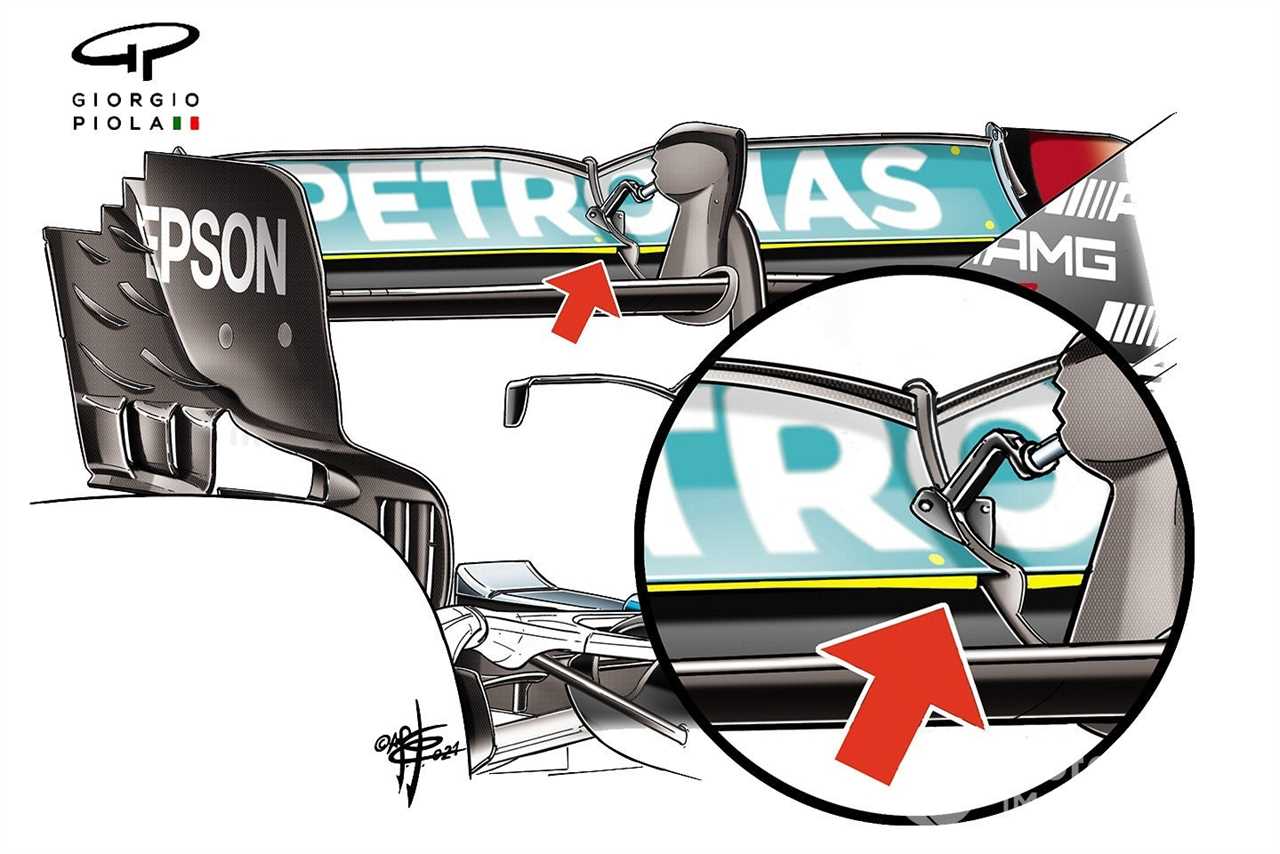 Red Bull seems to suggest that the rear edge of the main plan of the Mercedes W12 is bending at high speed to create an opening that is larger than the regulations allow.

If this were indeed the case, it would have the benefit of reducing downforce and drag, which would increase top speed.

In fact, this is why the slot-gap separators were introduced in the mid-2000s, as teams had started using aeroelasticity in such a way that they could increase performance by manipulating the spacing between the wing sections.

The slot-gap separators have long been seen as a way to prevent this from happening as they hold a gap between the two sections, but of course if a team could find a way to get around this it could offer a performance benefit. 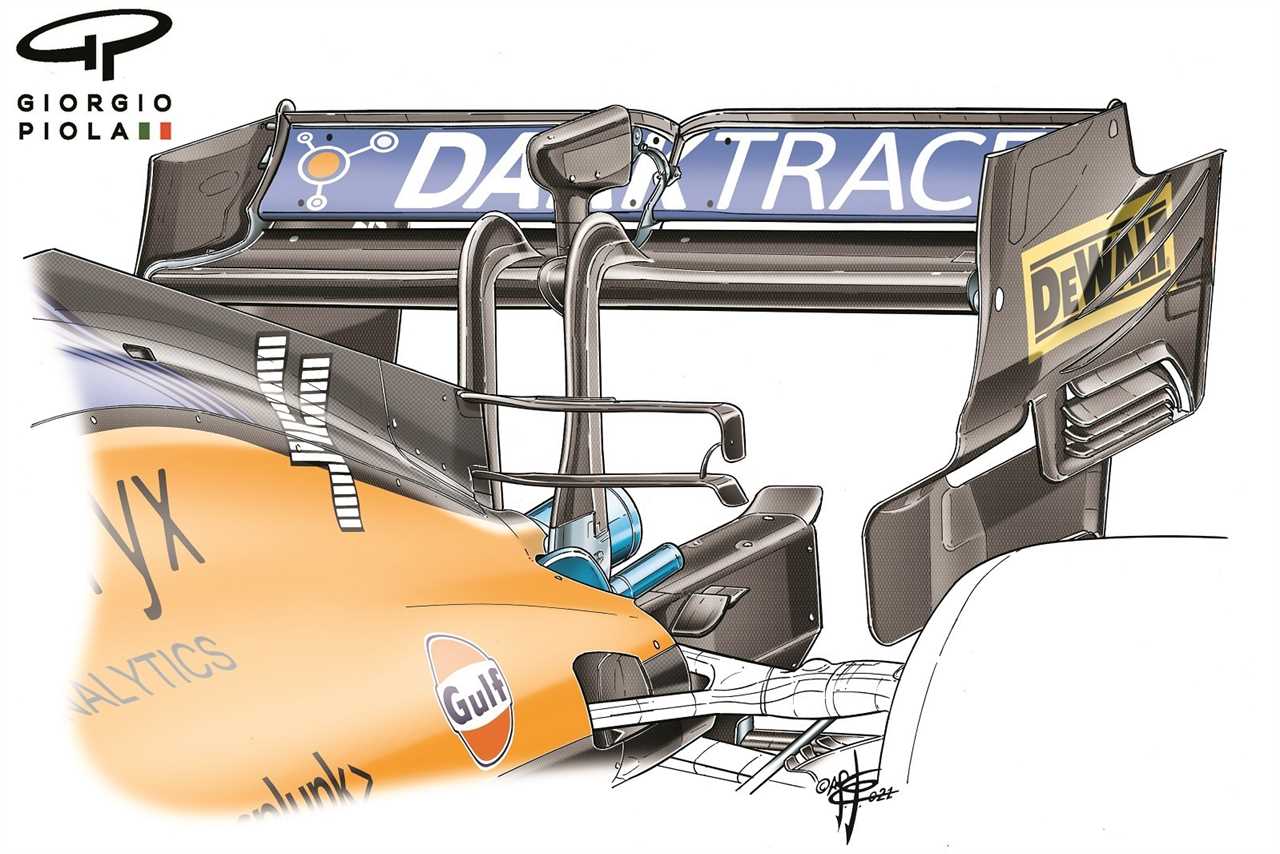 As part of the measures against flexi-wings at the beginning of the season, the FIA ​​is now also requiring the teams to put a number of points on the rear wing so that they can be visually monitored for flexion by the on-board cameras (as in the McLaren illustration above, with white dots on the main plane and black dots on the top flap, in their case).

It should be understood, however, that Red Bull has argued that these are ineffective in this case because the dots are in front of the area in question and the top flap obscures the trailing edge of the main wing aircraft when viewing the footage.

During a press conference with Horner and Toto Wolff there was another exchange, the former asked: “How do you explain the notches on the rear wing end plate?”, To which the latter replied: “I think it is allowed.”

As always in these situations, it depends on whether the glider is legal when tested.

There is currently no real test that verifies compliance in this area other than statically measuring the size of the gap.

Andrew Shovlin, Mercedes’ Head of Track Technology, quickly hit back while being interviewed on the subject:

“We looked at this and there are no points so we’re not exactly sure what it is, but it seems like a story that won’t go away,” Shovlin told Sky Sports F1.

“From our point of view, we are absolutely satisfied with what we have in the car. We invited the FIA ​​to watch this as often as they want.

“We’ll find out what’s the fastest, we’ll stick it on the car and not let another team advise us.”