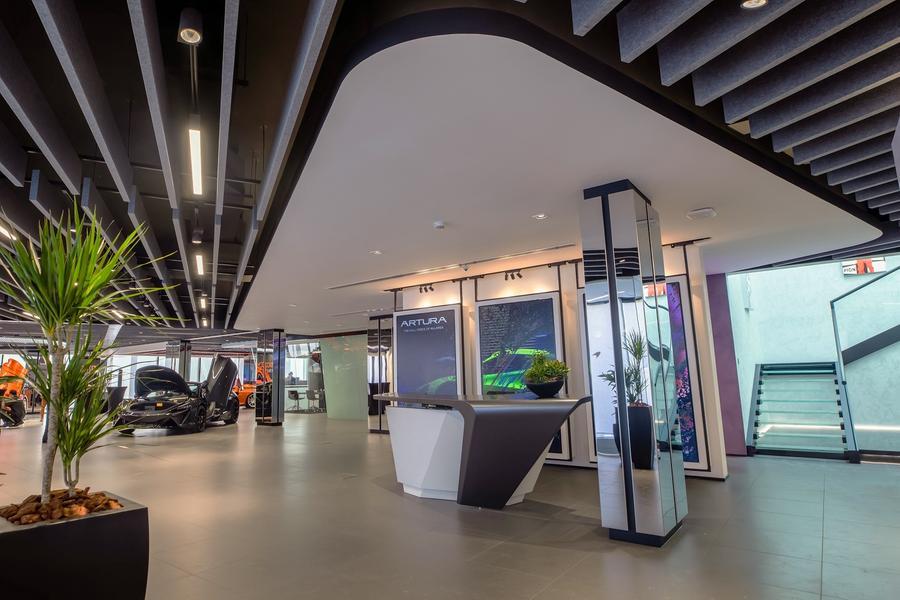 McLaren Automotive, the British creator of luxury, high-performance supercars and McLaren Bahrain, its dedicated Retail Partner operated by Kanoo Motors announce the opening of an enhanced sales and service facility based in the Kingdom of Bahrain.

The official opening ceremony named “Rediscover McLaren Experience” was held in the evening of September 21 and saw a spectacular showcase of current and past hybrid supercars from McLaren Automotive, including the all-new McLaren Artura, the McLaren P1

and McLaren Speedtail. The exclusive event was held under the patronage of the British Ambassador to Bahrain, Roddy Drummond and attended by McLaren Automotive’s leadership team including George Biggs (Commercial Executive Director), Brett Soso (Managing Director – EMEA) and Mohamed Fawzi (Market Director – MEA) . The attending dignitaries, customers and members of the press had further opportunity to admire the iconic M14D-01 Formula One car, driven by Denny Hulme during the 1970 Formula One season, which complemented the breath-taking display.

The newly refurbished facility focuses on improved customer experience and will be the brand’s first showroom in the Middle East & Africa to feature a small coffee bar and the “Woking Window”, which gives the impression of a direct view into the McLaren Production Center where McLaren supercars are meticulously hand-assembled. A range of branded merchandise and accessories will also be available for purchase for fans and customers alike. The showroom is complemented by an adjacent aftersales facility which offers local owners unparalleled technical expertise and assistance throughout all stages of their ownership.

This significant investment is a real testament to the confidence in the future of McLaren Automotive in the Middle East region and arrives in advance of the first deliveries of the all-new McLaren Artura, which marks a new era for the brand and the wider supercar segment .

“I am delighted to officially inaugurate this impressive facility, which solidifies our already strong presence in the Kingdom of Bahrain. I would like to thank and congratulate Kanoo Motors for their continued support and I am confident that together we will continue delivering professional and engaging customer experience that is representative of the McLaren brand.”

“We are honored to officially open the newly refurbished showroom of McLaren Bahrain. This important milestone coincides with more than five years of our partnership with McLaren Automotive and we are excited about our shared future with the arrival of the all-new McLaren Artura. We look forward to welcoming back our discerning customers, who will now be able to enjoy an enhanced level of automotive retail experience combined with impeccable customer service that Kanoo Motors have long been known for.”

McLaren Automotive is a creator of luxury, high-performance supercars.

Every vehicle is hand-assembled at the McLaren Production Center (MPC) in Woking, Surrey, England.

Launched in 2010, the company is now the largest part of the McLaren Group.

The company’s product portfolio of GT, supercar, Motorsport and Ultimate models are retailed through over 100 retailers in over 40 markets around the world.

McLaren is a pioneer that continuously pushes the boundaries. In 1981, it introduced lightweight and strong carbon fiber chassis into Formula 1 with the McLaren MP4/1.

Then in 1993 it designed and built the McLaren F1 road car – the company has not built a car without a carbon fiber chassis since. As part of the Ultimate Series, McLaren was the first to deliver a hybrid hypercar, the McLaren P1

. In 2016, it announced a new hybrid hyper-GT and confirmed in 2018 that the next Ultimate car would be the Speedtail.

2019 saw McLaren launch the 600LT Spider, the new GT and the track-only McLaren Senna GTR. It also unveiled the 620R and McLaren Elva before launching the 765LT the following year.

Most recently, the company unveiled its all-new high-performance hybrid supercar, the McLaren Artura.

The Artura is the first McLaren to benefit from the McLaren Carbon Lightweight Architecture (MCLA). The MCLA is designed, developed and manufactured at the McLaren Composites Technology Center in the Sheffield region of England using world-first processes and will spearhead the brand’s electrified future.

The McLaren Group is a global leader in luxury automotive and elite motorsports with a focus on its Automotive supercar and Racing businesses.

Founded in 1963 by racer, engineer and entrepreneur Bruce McLaren, the Group is formed of McLaren Automotive, which hand-builds lightweight supercars; and a majority stake in McLaren Racing which competes in the Formula 1 World Championship and INDYCAR in the US.

The Group is globally headquartered at the iconic McLaren Technology Center in Woking, Surrey, England.

With a reputation for innovation and technological excellence, McLaren is one of the UK’s largest independent companies.


Did you miss our previous article...
https://formulaone.news/mclaren/wolff-niki-would-have-raised-his-hat-for-nyck