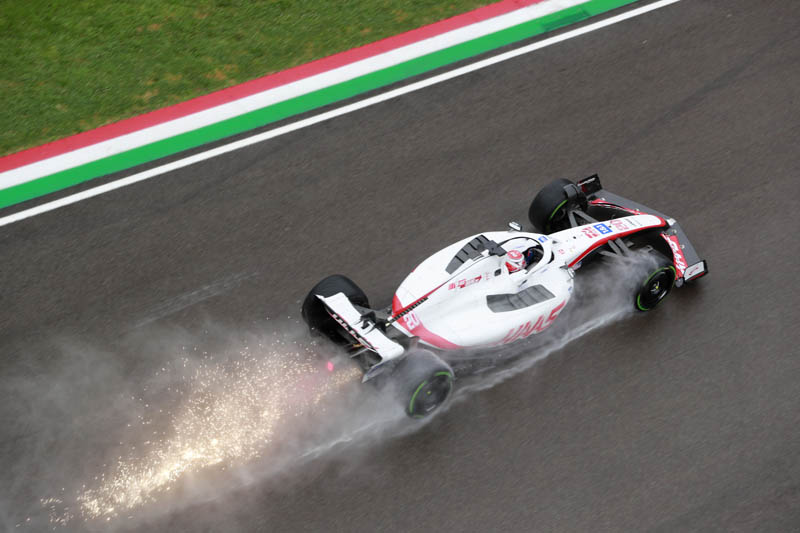 Prior to Friday’s knockout qualifying Magnussen and Schumacher braved the wet track – with rain falling continuously since the previous evening – FP1 the sole practice session to dial in their VF-22s. Both drivers ran a set of Pirelli’s Cinturato Blue extreme weather tires to start before switching onto the Cinturato Green intermediate compound as track conditions slowly improved. Magnussen’s quickest lap was a 1:32.439 (P4) with Schumacher directly behind his teammate recording a 1:32.988 (P5).

Both Magnussen and Schumacher advanced out of Q1 to start qualifying on a positive note. With a dry line emerging after a halt in the showers overhead, Pirelli’s P Zero Red soft tires were utilized. Magnussen clocked a 1:20.147 (P7) to move through to Q2 while Schumacher banked a 1:20.422 (P14) to follow his teammate into the next phase. Rain threatened as the session wore on and it proved critical to score an early lap time in dry conditions. Magnussen set a 1:19.902 lap and with the rain eventually falling – the Dane progressed to Q3 in P7. Unfortunately for Schumacher, his Q2 dry time – a 1:20.916 held the German P12 on the timesheets and out of qualifying.

Magnussen’s third Q3 appearance in four starts this season delivered a placing of fourth at the checkered – a qualifying best for Haas F1 Team. There was early drama, however, as an off-track excursion at T12 almost cost Magnussen his Q3 shot, but he successfully returned his VF-22 to the garage. He rejoined proceedings, eventually going on to record his fastest lap of 1:29.164.

Kevin Magnussen: “First of all, what a result. It’s great, it feels amazing, I can’t really believe it – it’s that close to top-three. P4 is the best qualifying for Haas ever, so I’m really proud of that and the team. I went off, lost the car and went all the way through the gravel. I managed to just keep it going and do a bit of a four-point turn and get back on track. The car was just phenomenal , and I can’t believe we’re P4. It’s looking like it’s going to be dry tomorrow so we’ll just do the best we can, I don’t know what to expect. We’ll go and have fun and give it everything we’ve got like we did today.”

Mick Schumacher: “A mistake at Turn 7 led to me losing over a second so I think we would’ve been through. It’s a shame but now we have two more races to come and hopefully we’ll be able to fight our way through – the car feels great.Already in Melbourne we were able to fight pretty hard with the cars around us and one thing which was very positive was that we were able to keep the tires alive for quite a while.It’s all to play for tomorrow and hopefully we have a bit of luck on our side to be able to maybe get into the points.”

Guenther Steiner, Team Principal: “A very good day today. They were very challenging weather conditions and I know that is the same for everyone but after Australia we really needed this, and we bounced back. In Australia, we didn’t have a fantastic weekend but this weekend we all started right on Friday morning, confidence levels were high Finishing with Kevin in P4 is fantastic – it’s another best for Haas F1 Team For Mick, he was almost there, just a little bit missing but P12 is not a bad position to be starting the race so starting fourth and 12th, let’s see what we can do tomorrow.”

Check out our Friday gallery from Imola, here.