Sebastian Vettel is using the Canadian Grand Prix weekend to draw awareness to what he calls the country’s “climate crime” by wearing a special.. 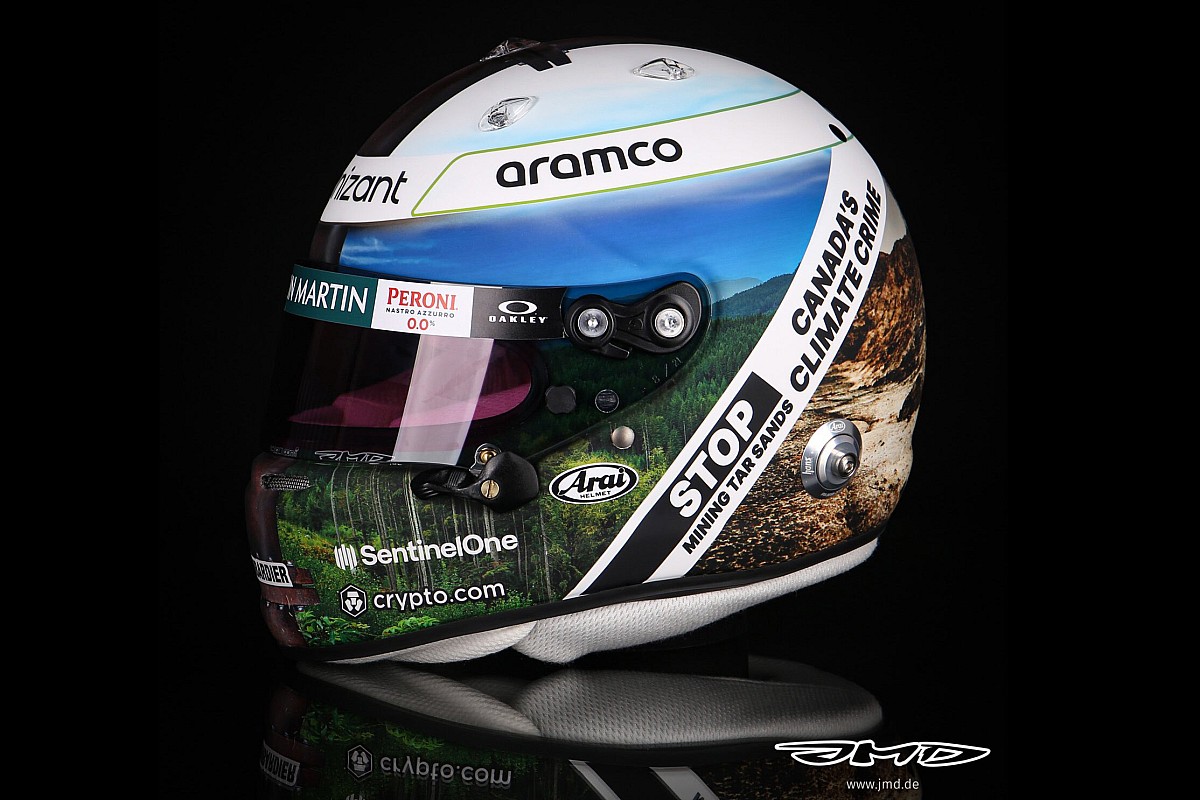 Sebastian Vettel is using the Canadian Grand Prix weekend to draw awareness to what he calls the country’s “climate crime” by wearing a special helmet for the Formula 1 round.

The four-time world champion has also been arriving at the track each wearing a T-shirt bearing the message “Stop mining tar sands – Canada’s climate crime.”

The message is a reference to the controversial oil sands operation in Alberta, which has been described as the world’s biggest industrial project.

It involves bitumen being dug from huge open pits on land that used to contain forests.

In addition to the T-shirt Vettel’s helmet painter Jens Munser has created a design showing an oil pipeline.

Vettel has tackled local issues at several races this year, including the threat of sea level change at the Miami GP.

Asked by Autosport if he chose his causes through his own investigations or was now being approached by people asking for help he insisted that the former was still the case.

“No, nobody’s contacted me,” he said. “I do a lot of reading on the subject because I find this – fascinating might be the wrong word – but there’s a lot going on. And I think we live in a time and age where we are so much aware of a lot of things.

“What happens in Alberta is a crime because you chop down a lot of trees, and you basically destroy the place just to extract oil. And the manner of doing it with the tar sands, mining oil sands, mining is horrible for nature.

“And obviously Canada’s greenhouse gas emissions also have gone up since they started doing it.”

Vettel explained that the mining was a relatively new development, and thus was introduced at a time when awareness of environmental issues was already high around the world.

“The site has only been, I think, as far as I read, founded like 20 years ago. I think the prime minister said that no other country would find these resources and not take them up.

“I think in principle every country and every person has their opinions and their stance. My personal opinion is I disagree. I think as I said, there’s so much science around the topic that fossil fuels are going to end, and living in a time that we do now these things shouldn’t be allowed anymore, and they shouldn’t happen.

“So I think it’s just in principle to raise awareness of what’s going on in the first place. I think a lot of people in Canada, a lot of people around the world don’t know about it, and that’s only a small gesture.”

“We’ll have a special helmet as well this weekend, highlighting the fact and I think it’s just to think about future generations and the world we leave in their hands once they’re old enough to carry on, to take care of it. I think it’s only fair to look after it and not destroy it.”

After Vettel’s stance was reported in the Canadian media Alberta’s minister for energy Sonya Savage was quick to respond, highlighting his connections with Aston Martin partner Aramco.

“I have seen a lot of hypocrisy over the years, but this one takes the cake,” she said on Twitter.

“A race car driver sponsored by Aston Martin, with financing from Saudi Aramco, complaining about the oil sands. Saudi Aramco has the largest daily oil production of all companies in the world. It is reputed to be the single largest contributor to global carbon emissions, of any company, since 1965.

“Rather than demonizing the oil sands, which is on a path to net zero, people could look to lowering their own personal carbon footprint. Perhaps a pedal car for Formula 1?”