After a long wait of just under four months, the 2022 MotoGP™ season is about to kick off in Qatar. Team Suzuki Ecstar’s riders, Joan Mir and Alex..

After a long wait of just under four months, the 2022 MotoGP™ season is about to kick off in Qatar. Team Suzuki Ecstar’s riders, Joan Mir and Alex Rins, will debut their new GSX-RR in ‘racing mode’ following two useful and successful tests in Malaysia and Indonesia last month.

Losail International Circuit, just outside the Qatari capital of Doha, has become the regular location for the season opener ever since 2007. It’s well known for its desert location and spectacular formation of 3600 lighting structures which illuminate the season’s only night race.

Mir has enjoyed success at the circuit in the past, winning in 2017 in the Moto3™ class, and taking a strong fourth last year.

Rins’ last two appearances here have seen him take fourth and sixth, and it’s a track he feels comfortable at.

Team Suzuki Ecstar will take on this first round of 2022 under new leadership from freshly-appointed Team Manager, Livio Suppo, and the Italian is keen to get stuck in straight away as the team take to the track in anger for the first time since last November.

Losail Circuit has the record for the closest Top 15 ever in the premier class MotoGP™ era, set in 2019 when 15.093 seconds separated the winner and the rider in 15th.

“Starting the season in Qatar is fantastic, it’s what we always think of when we think about the opening round! The darkness and the lights make it a very special race with a different atmosphere compared to everywhere else. I have been taking time in this break to rest but also to train very hard, and the team have done a great job all winter, this weekend we’ll begin our work with Livio, so I feel ready to start!”

“I like visiting Qatar, as soon as you arrive you know you’re about to start another adventure and another new season! I can feel that the 2022 GSX-RR has a lot of potential and I’m eager to go on track for the first time on Friday. We will welcome our new Team Manager into the team this weekend, and I can’t wait to work all together.” 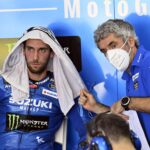 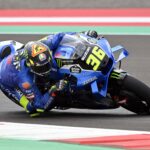 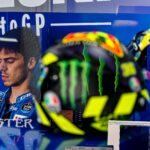 “I’m very excited to start working with the Suzuki Ecstar team – Joan, Alex, and the whole crew. Of course, I will do my best to come back to the paddock and adapt as quickly as possible to the team and their way of working, I’m looking forward to starting. However, I’d like to underline that it’s important this weekend to try and give some smiles for a few hours to the people who are suffering in these moments. And good luck to everybody. Let’s make sport, not war!”
Suppo also told Crash.net:

“The team is there, the bike is there, the riders are there. The atmosphere is very good and I think again this is thanks to the job that Davide has done. So my target is to try and keep at least this level of harmony and see if there is something in my experience I can bring to the team.

“I’ve known Sahara-san for a long time, even before Suzuki left MotoGP after the 800 era, because he was there in the MSMA when I was in Ducati. So I know a little bit his character. I know very well Manuel Cazeaux, the chief technician of Alex Rins, because we worked together in Ducati and had a good relationship with him and I trust him, I know he’s a guy I like a lot.

“The details make a difference. It won’t be a revolution. It’s not that because I’m here Suzuki will instantly be stronger. It’s impossible. But hopefully it will be easier for everybody to work in Suzuki. This is my target.”

“I’ve always been lucky in my career in MotoGP because I’ve always worked with super strong riders since the beginning with Troy and Loris at Ducati. I think Joan and Alex are two of the strongest riders out there.

“The machine is also good for sure. They won the title two years ago and without the crash for Alex at Jerez probably could have been possible to do a one-two for Suzuki in 2020.

“As I think Sahara-san said, when you have two strong riders like Joan and Alex the priority is to keep them on board, because it’s not easy to replace them.

“But on the other side, maybe this is because I’m getting older, if the MotoGP paddock could come back to what we did 15-20 years ago and wait until a little bit longer in the season to take any decisions this could be good for the sport.

“In the pre-season test sessions, we felt progression with our bikes with some updates from the Hamamatsu factory. Those new items have been put into play by the Team, and both Joan and Alex adapted very quickly during the winter. Joan is Joan, he is one of the best riders and super motivated. Alex showed speed and consistency in the winter testing that worried all his rivals. So, I can say we are ready and in very good shape. But I also think we still have some room for another step of improvement to be even stronger in terms of bike performance and team management. The factory in Hamamatsu never stop developing and pushing, and we also plan on some further updates for the GSX-RR during the season. Our new Team Manager, Livio Suppo, will also reinforce the team’s performance. I’m quite confident his knowledge and experience will bring extra strength to us. Now what we should do for the race weekend is keep our heads cool to avoid any mistakes, we are ready!”