Joe Roberts will start tomorrow’s final Moto2 Grand Prix of the season from 14th on the grid. File photo courtesy of Italtrans Racing.Italtrans..

Italtrans Racing’s Joe Roberts and American Racing’s Cameron Beaubier will start the 18th and final Moto2 Grand Prix of the season from 14th and 18th on the grid, respectively, after solid qualifying efforts from the pair of Californians at the Circuit Ricardo Tormo in Valencia, Spain.

Beaubier made it directly through to Q2 by virtue of his 1:35.702 in FP3, which placed him 12th and just .490 behind Red Bull KTM Ajo’s Raul Fernandez, the Spaniard leading the way for in the majority of the sessions in Valencia prior to Q2.

Roberts, meanwhile, just missed out on a direct transfer to Q2 as he ended FP3 in 15th – just .059 of a second out of 14th and what could have been a straight shot into Q2. But he came through in Q1 to post the fourth fastest time to slide into Q2, putting both former MotoAmerica racers into Q2.

In Q2, it was Roberts saving his best for last with his 1:35.409 putting him 14th for tomorrow’s Grand Prix. Beaubier, meanwhile, couldn’t match his best lap from FP3 and his 1:35.961 only good enough for an 18th-place start tomorrow.

Pole position went to MV Agusta Forward Racing’s Simone Corsi, the Italian earning his first pole since 2012 with his best of 1:34.957. Corsi will be joined on the front row by SKY Racing Team VR46’s Celestino Vietti and Elf Marc VDS Racing’s Augusto Fernandez.

As for the World Championship, Red Bull KTM Ajo’s championship leader Remy Gardner ended Q2 in eighth and will start the GP from the third row. His teammate, and the only other rider with a mathematical chance of taking the title, will start from the second row after qualifying fifth, despite a crash in the waning moments. 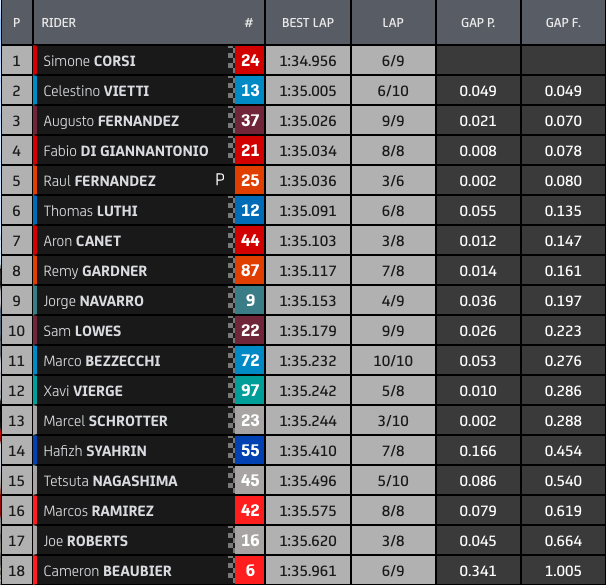