MotoGP, Jorge Lorenzo, the greatest minutes of his profession

Jorge Lorenzo has called the time and announced his retirement from racing as soon as the Valencia Grand Prix is ​​over. It was a sportingly..

Jorge Lorenzo has called the time and announced his retirement from racing as soon as the Valencia Grand Prix is ​​over. It was a sportingly devastating, injury-related devastating year 2019, which prompted the great Spanish champions to make this decision and thus ended a career that was as long as it was extremely successful. Lorenzo is one of the most successful drivers in history and here are some of the highlights of his career.

Jorge Lorenzo made his first appearance in the World Championship paddock in Jerez. This was the third race of the 2002 season, however a small administrative problem prevented Jorge from competing on Friday. Lorenzo was born on May 4th and was therefore less than 15 years old on May 3rd, 2002, the minimum age for participation in the championship.

Lorenzo celebrated his birthday on Saturday and made his track debut with a Derbi. And so began its wonderful story in the World Cup.

JORGE LORENZO BLOWS THE CANDLES IN JEREZ. OUT

After three seasons in 125, in which Jorge was often the front runner, but not quite in the race for the world title, the Spaniard switched to the 250cc class in 2005 and finished his rookie season in fifth place overall. His clean driving style was highlighted on the 250, but his immense talent wasn’t revealed until he climbed aboard the Aprilia.

Jorge won the first two races of the season and won six more. Gigi Dall’Igna, who was still working in Noale at the time, fell in love with Jorge, who was crowned champion at the end of the year, and took over the baton from Dani Pedrosa, who had just switched to MotoGP after winning the 250cc title in the past two years.

Lorenzo began to emerge as a personality and he began collecting a variety of nicknames starting with “Porfuera”, due to his great ability to attack his rivals by bypassing them from the outside, with movements that were often at the limit of physics.

In sport they say it is much more difficult to win again than to win the first time. In his third 250cc season, Jorge managed to win his second title, dominant throughout the season to get nine wins. His mind began to turn to MotoGP, where many manufacturers were interested in his talent, but the perfect opportunity finally came with Yamaha, who sought a replacement for Colin Edwards as Valentino Rossi’s team-mate. So they made a bet on the young Spaniard. 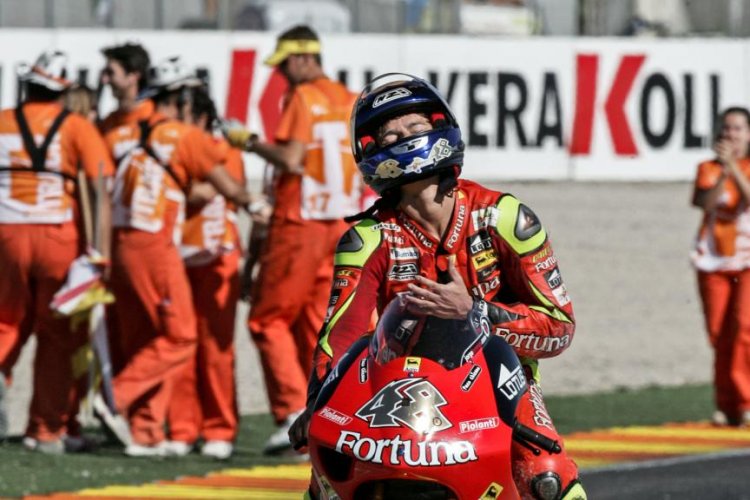 Jorge made his MotoGP debut in 2008, but after impressing early in the season with pole positions and wins, he suffered a number of falls, some of which were dangerous. His approach to the reigning class proved too aggressive and the violent MotoGP motorcycle saw him pay the price. Mid-season, Lorenzo even went so far as to say he was afraid of dying on the track and considered retiring. However, he found the strength to keep going and became Valentino Rossi’s main competitor for the title in 2009.

Fully mature as a driver, he won the title in 2010, also taking advantage of Rossi’s physical problems. In the middle of the season, the Italian decided to switch to Ducati. Lorenzo essentially became the first rider at Yamaha and the two riders struggled to come together under the same roof as their strong personalities clashed. Lorenzo was at the top of his game, few drivers could beat him on the track. 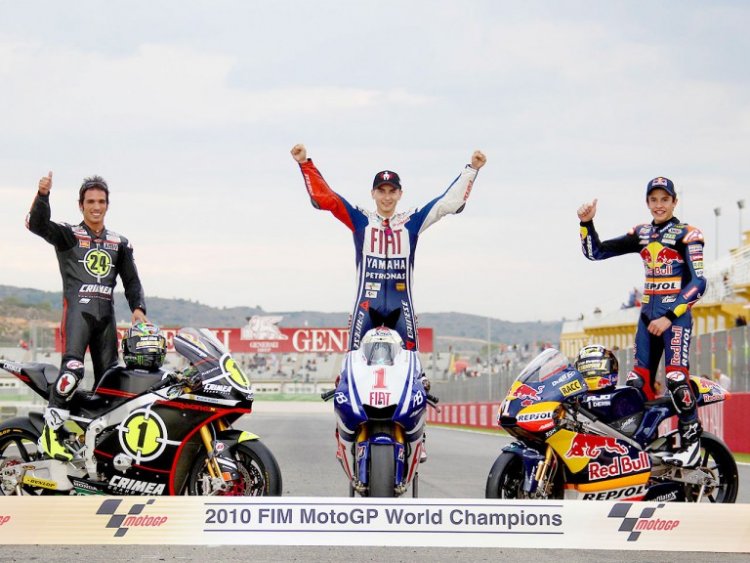 HIS FIRST MOTOGP TITLE IN 2010

2012 – STEINER FLASHES THE WHITE FLAG, LORENZO DOES IT AGAIN

When Casey Stoner climbed aboard the Honda in late 2010, it was clear that he would be Lorenzo’s main competitor for the 2011 title. The Australian beat them all and was the favorite the following season as well. But when an injury forced him to miss several races, he paved the way for Pedrosa and Jorge Lorenzo.

The Spaniard had relieved Rossi of responsibility for the development of the M1 and seemed to be good at itbecause he took seven race wins and an impressive series of podiums that saw him secure the MotoGP title for the second time. His fourth title in a career that looked really impressive.

2013 – ASSEN AND THE FIGHT AGAINST EVERYTHING AND EVERYONE

In 2013 a certain Marc Marquez came into MotoGP, but Jorge Lorenzo had no intention of laying down his arms or give up the title fight. He reunited with team-mate Valentino Rossi, dominated the first race of the season and immediately proved that he wanted a fifth title at all costs.

Lorenzo went to Assen as championship leader after having already achieved three wins and two podiums. A very frightening fall in free practice should have shut him out, breaking his collarbone. But Jorge did not give up and tried an incredible feat. He flew to Barcelona, ​​where Doctor Mir performed an operation to reduce the fracture, and then returned to Assen, where he lined up for the race and took an incredible fifth place.

A historic achievement, which only underscored the Spaniard’s determination to maintain his position as the man to beat in MotoGP. 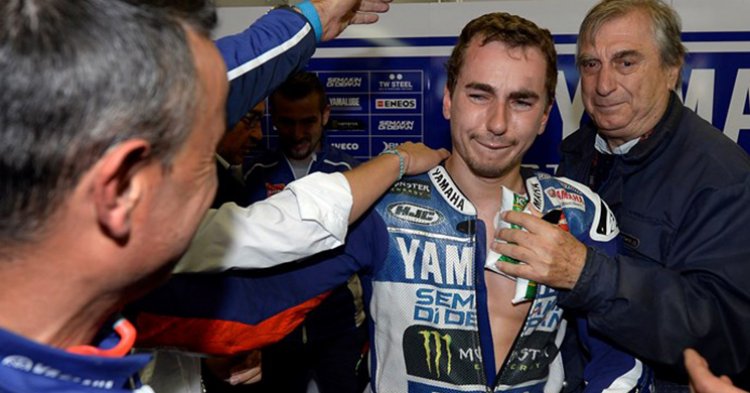 2015 – THE LESSLY CELEBRATED TITLE IN HISTORY

Everyone knows the history of the 2015 championship. A vicious battle between Lorenzo and Rossi over an entire season in which the Spaniard finally secured the title in Valencia. But there wasn’t any of the usual garage celebrations, as the controversy over what had happened in Sepang and Lorenzo’s opinions about it were still in the spotlight.

Feeling cheated by Yamaha after winning three MotoGP titles with them, Jorge decided to take up an offer from Ducati, attracted by a sizeable salary and the idea of ​​winning on the bike that Rossi hadn’t tamed. Jorge felt like an outsider in 2016 and preparing for the Borgo Panigale Challenge, which started with winter testing in Valencia and which turned out to be much more difficult than expected.

Time does not wait for a man, and Lorenzo was aware of it. After long and hard fighting with the Desmosedici, things finally turned around in Mugello. Lorenzo drove great, dominated the race and scored his first win on the red bike. At the end of the season he had taken three wins, but the win at Mugello was very special.

Unfortunately, that first win came a little late as Ducati had already hired Danilo Petrucci to take the Spaniard’s place from 2019. An angry Jorge came to an agreement with Honda. His Ducati adventure might not have been the best ending, but Jorge won in some ways. since no one had thought that he could bring the Ducati to the top step of the podium.

In reality, Lorenzo and Ducati formed the strongest pairing on the track for much of 2018, the Spaniard being the only rider who could really fight Marc Marquez for the title. At the end of the season he drove the Honda for the first time and the rest, as the saying goes, is history. 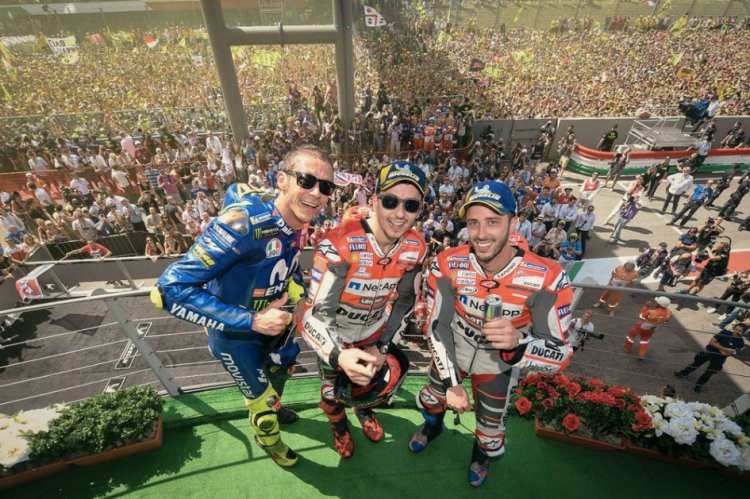