Jake Gagne put in a very Cameron Beaubier-esque performance in the first of two MotoAmerica HONOS Superbike races at VIRginia International Raceway today. The Fresh N ‘Lean Attack Performance Yamaha rider led from start to finish, securing his second win of the season and his second in a row.

Gagne, who broke the five-time MotoAmerica Superbike Champion Beaubier’s lap record Earlier in the day during the final qualifying, he shot from pole position to the front and was never in the lead, overtaking Westby Racing’s Mathew Scholtz in 11.8 seconds.

“Everyone likes to get a win every now and then – said Gagne – I’m just grateful to the Fresh N ‘Lean Attack Performance Team. Having a year under you on the same bike with the same team coming back next year just makes me feel very comfortable. I worked a lot on my driving and thinking process in the off-season when I was out there. As I said, hats off to my team because these guys work so hard. You were up late last night swapping another engine. It seemed like one thing at a time, but to make it through and pull through here today is great. Of course I wanted to get off to a good start. I had problems with my starts and I think that was one of my better starts. I was surprised that I didn’t see Mat (Scholtz) or Loris (Baz) or Josh (Mistress) or anyone inside. I just wanted to move forward and try to do consistent laps. I knew this was going to be a long, tough race on these tires. These dunlops hold up well how hot it is out there. Hats off to the team. Hats off to all of these guys. We have a Yamaha and a Sweep for Yamaha, that’s really nice. We’ll go back and try to work on a few little things. Try to make the bike a little easier. I know Mat, Josh, the Suzukis, probably the Ducati, they will all be there tomorrow. Hats off to the team and hats off to the fans out here. Let’s see what we can do tomorrow. “

Scholtz didn’t win, but he was the next best and it kept him at the top of the point table with his 65 points ahead of Gagne and his 50 points. Josh Herrin, third today, is third in the fight for the title with 48 points.

The best race in the HONOS Superbike race was the race for third place between Josh Herrin (2), Loris Baz (76) and Cameron Petersen (45). Photo by Brian J. Nelson

“Of course, after winning the first race, we were confident that we should at least challenge Jake (Gagne) until the last lap,” said Scholtz, definitely stronger than us. So we just have to try a few things. I was able to follow him for the first four or five laps and have already figured out where we can catch up a few tenths and where I easily caught up with him. So it’s not like we’re miles away from it. We just have to fix a thing or two and we should challenge Jake. Overall, I’m happy to finish second and continue the championship lead. I’m talking about being a championship leader, but it’s way too early to think about it. It’s always nice to be the one who doesn’t have to risk everything in every single corner, in every single lap. You can be satisfied with those seconds sometimes. I know Jake is definitely coming. I know Josh Herrin, Camer auf Petersen, (Loris) Baz, all these guys are picking up their pace. So back to the point where we lost time and try to focus on getting a faster pace towards the end and not worrying about being in front of every turn. I want to thank my team. You were great. Like I said, we might have to try to challenge Jake and get ahead of him for the first few laps. He’s running at a really crazy pace, so just try to get it up in him. “

Third place for the third race in a row was Herrin on the second Fresh N ‘Easy Attack Performance Yamaha – 15.478 seconds behind his teammate. Although he finished third again, Herrin was happier with it than the previous two at Michelin Raceway Road Atlanta.

“It feels better because we had an argument and I could see Mat (Scholtz) at least second – said Mistress – I’m happy with that, but no matter who you ask, it’s difficult to be so far from Jake be.” (Gagne). I don’t want to finish third every race, but we’re collecting solid points. I feel like I get better with every session on the bike. I was hoping for a better race today. I thought I was closer to the front, but I just didn’t have the pace at the beginning. I thought I had it and Bobby (Fong) kept coming back and I just couldn’t keep fighting to get around him. I just wasted time. So I let him lead and then I couldn’t even hold on to him. I don’t know what was going on, but I just couldn’t hang out. As I said, I am satisfied with the points. Overall, I’m happy, but we have to improve. As I said, we improve every session. We have a lot of data from it and hopefully tomorrow it will be better. “

The battle for third place was good with Mistress, Warhorse HSBK Racing Ducati Loris Baz from New York and Cameron Petersen from the M4 ECSTAR Suzuki swap places for most of the race. It all came down to the final laps, when Baz Petersen pushed far into turn one and Herrin finally took full advantage. The trio crossed the finish line in formation and with only 0.8 seconds between Herrin and Petersen, while Petersen was just 0.006 seconds behind Baz.

Bobby Fong of the M4 ECSTAR Suzuki was ousted from third place early due to a mechanical problem, but managed to save 12th place (and four championship points) at the end of the 20-lap race. 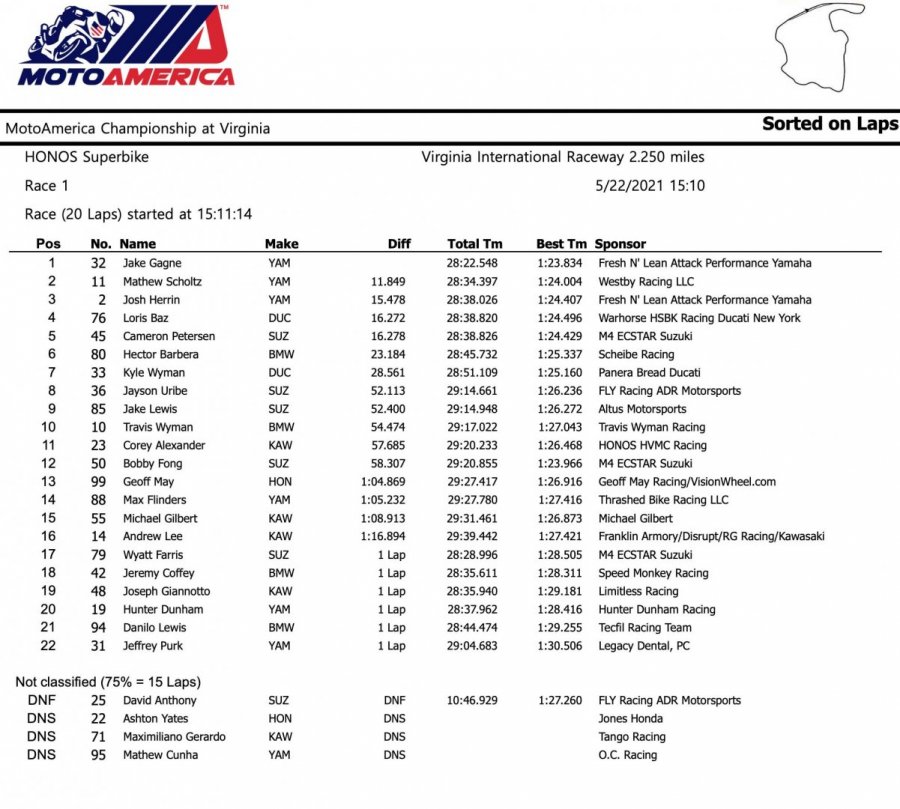