Beaubier (6) was at the sharp end of the Red Bull Grand Prix of The Americas Moto2 race from start to finish. Photo by Brian J. Nelson.To the..

title
Beaubier (6) was at the sharp end of the Red Bull Grand Prix of The Americas Moto2 race from start to finish. Photo by Brian J. Nelson.

To the absolute delight of the enthusiastic crowd at the Circuit of The Americas in Austin, Texas, Cameron Beaubier finished fifth in today’s Red Bull Grand Prix of The Americas Moto2 Race. The five-time MotoAmerica Superbike champion recorded his best (by far) result of his rookie season in what is arguably World Championship motorcycle road racing’s toughest and most-competitive class.

Starting in fifth on the starting grid, Beaubier launched his American Racing Triumph Kalex off the line from the middle of the second row and got the holeshot into COTA’s tricky turn one. Coming into the corner a little too hot, Beaubier surrendered the position to current points leader Remy Gardner. Polesitter Raul Fernandez quickly took over first, though, as Gardner dropped to P4. Meanwhile, Beaubier and Fabio Di Giannantonio were in P2 and P3, respectively.

With 10 laps to go, Raul Fernandez held a 1.7-second lead over Di Giannantonio, who had broken free of Marco Bezzecchi, Beaubier, and Tony Arbolino. Beaubier and Arbolino then lost touch with Bezzecchi, and Augusto Fernandez slotted into fourth.

At the checkers, it was Raul Fernandez winning the race, with Di Giannantonio, Bezzecchi, Augusto Fernandez, and Beaubier rounding out the top five.

Fellow American Joe Roberts finished out a disappointing weekend on home soil, and he was credited with an 18th-place finish in Sunday’s race aboard his Italtrans Racing Team Triumph Kalex. 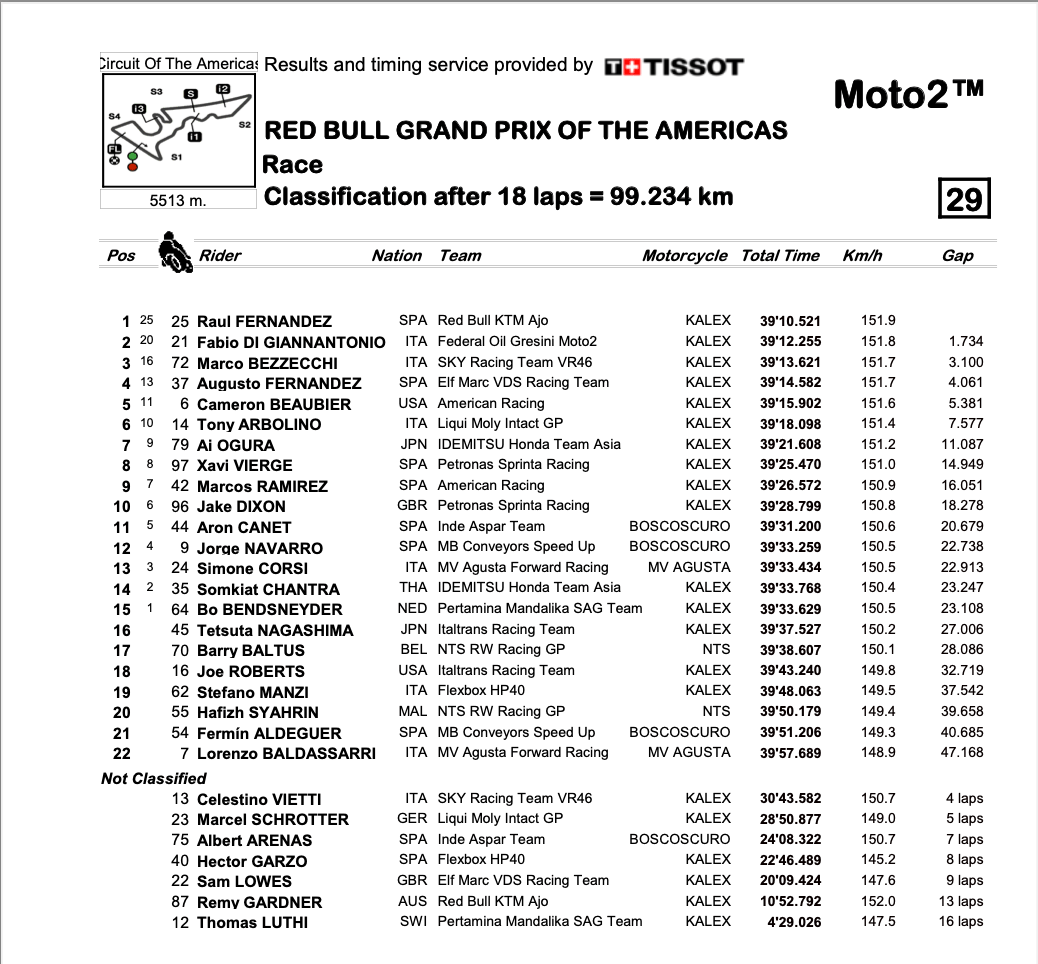 Did you miss our previous article...
https://formulaone.news/motorcycle-racing/vinales-defeats-ducati-quartet-and-takes-victory