Two is the magic number as we take stock of how the Thai GP turned the MotoGP title race on its headThe OR Thailand Grand Prix was a thriller in..

The OR Thailand Grand Prix was a thriller in itself, and it has also set up a thrilling run to the MotoGP World Championship finale. Just two points separate first and second in the riders’ standings with three rounds to go after Francesco Bagnaia (Ducati Lenovo Team) got onto the podium and Fabio Quartararo (Monster Energy Yamaha MotoGP) departed the Chang International Circuit emptyhanded. It means we are guaranteed a live title fight even when the field leaves Australia in a fortnight from now, so read on for the full Championship picture.

The pendulum swings between Quartararo and Bagnaia

After Quartararo charged to a great advantage in the Championship, Bagnaia brought himself back into contention with that stellar run of four wins and a second placing. Now, it’s hard to say that any of the top three on the points table have momentum after three crazy Grands Prix, at Aragon, Motegi, and now Buriram. Bagnaia got himself within 10 points of ‘El Diablo’ with a P2 at the MotorLand, only to see the gap jump to 18 points when he crashed in Japan, even if Quartararo finished eighth.

In Thailand, however, the live Championship lead changed twice during the race! Bagnaia nosed two points ahead when he climbed to second on the opening lap and Quartararo slipped to 17th after a big scare exiting Turn 4. Eventual race winner Miguel Oliveira (Red Bull KTM Factory Racing) turned the two-point margin back in the Frenchman’s favour when he relegated Bagnaia to third, but that was still 16 solid points for Pecco on a day when Quartararo didn’t get any. 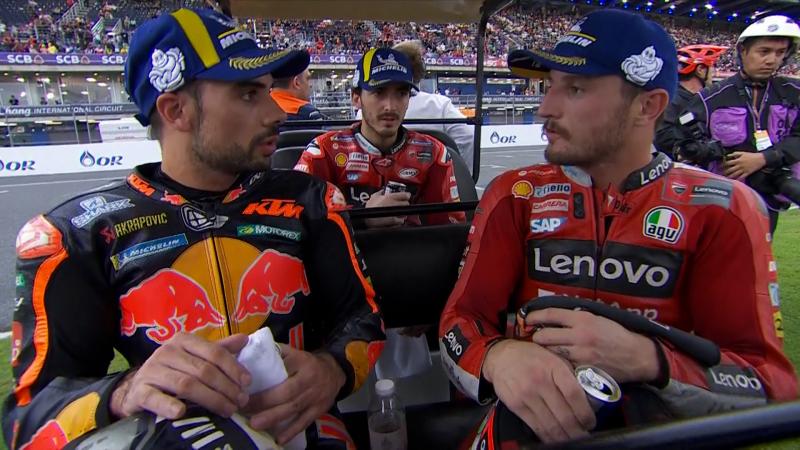 A. Espargaro keeps his hopes alive

So, while Bagnaia’s formline from the last three races is 2-NC-3 for a total of 36 points in that period, Quartararo’s reads NC-8-17 for a yield of just eight. But the rider who is third in the Championship, Aleix Espargaro, also had an up-and-down run of late with results of 3-16-11 and a total of 21 points in those three Grands Prix. However, even after having to serve a Long Lap Penalty in the Thai GP, the Aprilia Racing talisman can at least say that he gained ground on Quartararo when the situation looked so much worse after he had qualified only 13th. Espargaro is now 20 behind the Frenchman and has a fighting chance on the way to Australia. 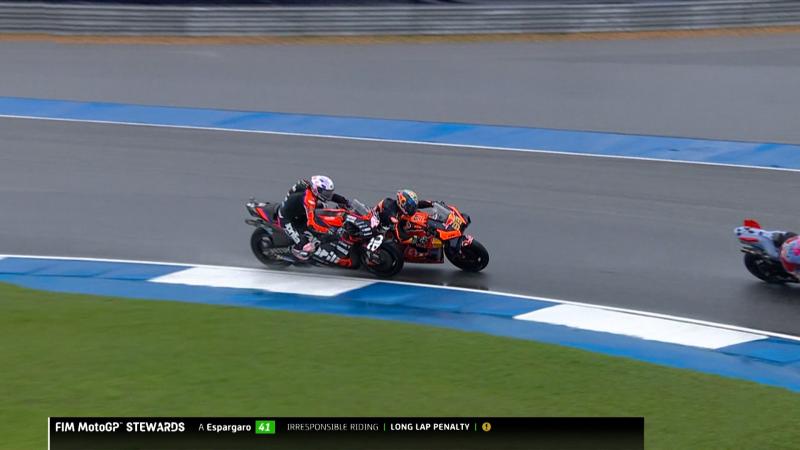 The Aprilia rider collided with Brad Binder at Turn 3, forcing the South African wide and getting him into trouble with the stewards

Speaking of Australia, what about Jack Miller (Ducati Lenovo Team)? He scored more points than anyone in the now-completed triple header with a fifth in Aragon, that dominant victory in Motegi, and a hard-earned second place in Buriram. While Miller remains fifth in the Championship as he heads home from Thailand to get married, the 52 points he picked up from those races has him just one point behind Enea Bastianini (Gresini Racing MotoGP), and 40 behind Quartararo. With 75 points still on the table, both ‘La Bestia’ and ‘Thriller’ are still in this. Did we mention Phillip Island is coming up?

It sure is. The Animoca Brands Australian Motorcycle Grand Prix is ​​the next stop on the calendar, on October 14-16. With a Championship battle this close, there’s no way you want to miss it!