Twitter Breaks as Soccer Star-Maker Kisses 1.25 Billion Hand of Mercedes F1 Boss Before Entrusting Him With His Life

Toto Wolff has quickly established himself as one of the most successful bosses in F1. The Austrian led Mercedes to unprecedented success winning 8.. 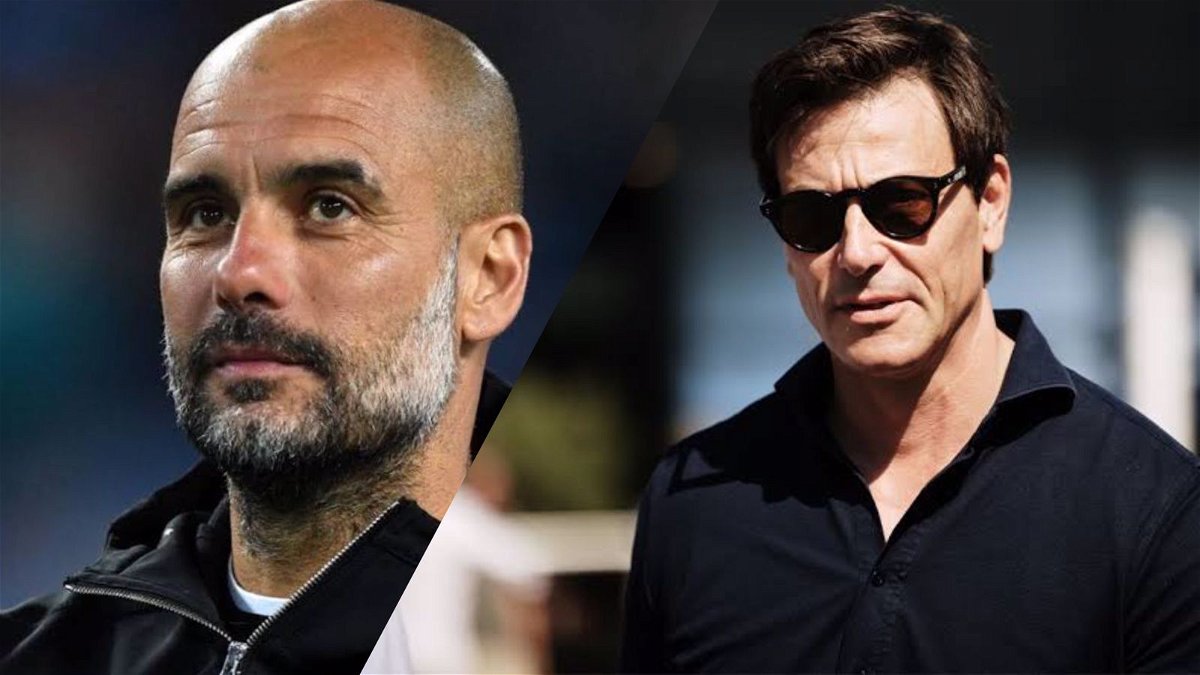 Toto Wolff has quickly established himself as one of the most successful bosses in F1. The Austrian led Mercedes to unprecedented success winning 8 constructor’s championships in a row. But what happens when one of the most influential team principals in F1 history meets soccer’s mastermind coach Pep Guardiola? Let us find out.

Pep Guardiola is a well-renowned soccer coach. Additionally, the Spaniard has tasted success with his current club in the Premier League. Moreover, his previous stints with Spanish giants Barcelona and German club Bayern Munich were fruitful as well. Guardiola was present in the Yas Marina Circuit and was also spotted exchanging jerseys with Mercedes boss Toto Wolff.

Mercedes has endured a tough season after dominating the sport for 8 years. The new F1 regulations caught the Silver Arrows out as their rivals took advantage and steered clear of them. However, that did not stop Toto Wolff from having some fun with the Manchester City manager.

The Austrian took Pep for a hot lap around the Abu Dhabi circuit. Mercedes shared the video and captioned the post, “I trust you, I promise” When Toto took @ManCity manager Pep Guardiola for an epic hot lap around @ymcofficial”.

Mercedes finished third in the constructor’s table behind Red Bull and Ferrari. Meanwhile, Guardiola’s Man City is currently second in the Premier League. Man City is owned by City Football Group, of which the majority share of 78% is owned by the Abu Dhabi United Group.

Toto Wolff’s meeting with Pep Guardiola expectedly broke the internet. We know the two leaders for their perfection and the development of a high standard team. Consequently, F1 fans on Twitter reacted to the 2 masterminds going on a spin with each other.

Moreover, some fans could not contain the excitement of watching Toto and Pep in the same frame.

Furthermore, some fans claimed it was the best video you could watch if you are a Toto Wolff and Pep Guardiola fan.

i always found pep a bit fruity and extremely funny but him kissing toto’s hand , i did NOT expect that

When you are an F1 fan, a Mercedes fan, a Toto Wolff fan, a pep fan. This video is the best thing you could watch

Toto Wolff would certainly take inspiration from Guardiola and look to turn their fortunes around. Especially considering Red Bull facing the consequences of breaching the budget cap, Mercedes has an added advantage over its rivals. Can Lewis Hamilton and Mercedes fight back in 2023?


Did you miss our previous article...
https://formulaone.news/mercedes/special-delivery-dropping-nyck-de-vries-off-at-alpha-tauri-
Mercedes