Norris ran the new aero parts in second practice in France, while Daniel Ricciardo used them all day, allowing the team to conduct a back-to-back.. 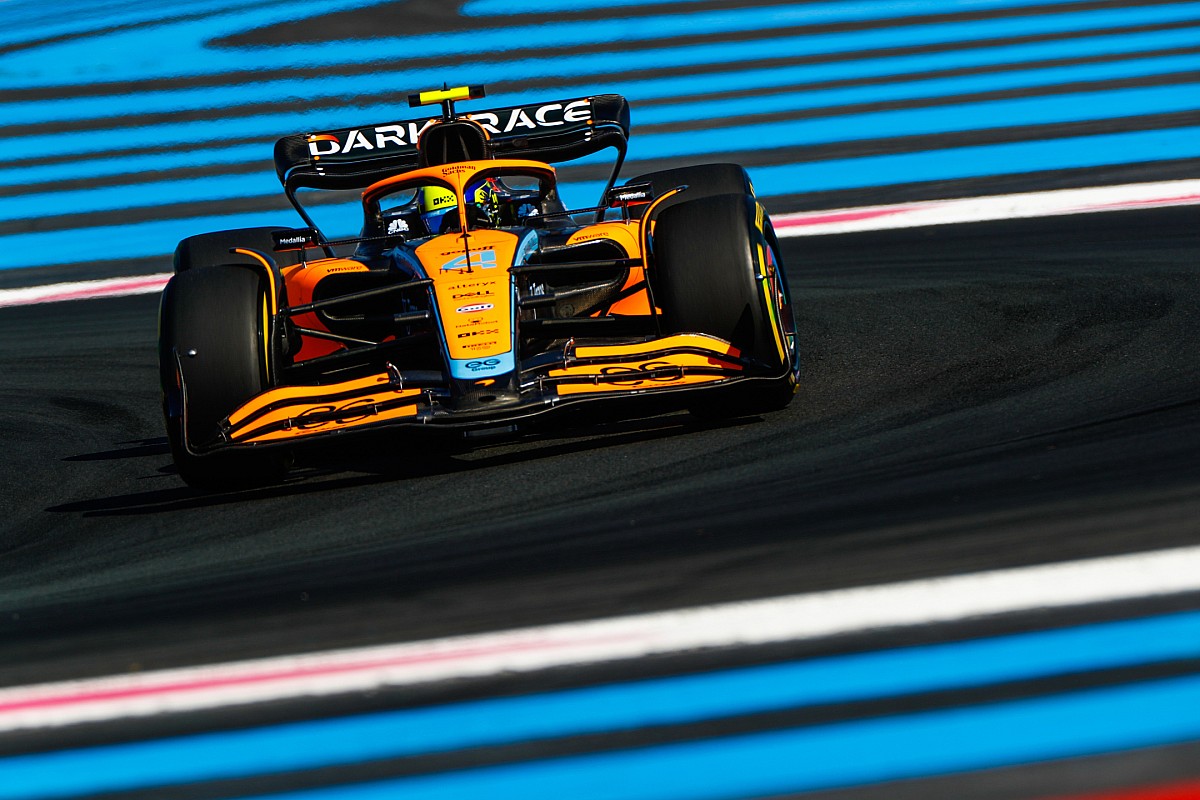 Norris ran the new aero parts in second practice in France, while Daniel Ricciardo used them all day, allowing the team to conduct a back-to-back comparison in FP1.

The latest raft of upgrades include a tweaked sidepod shape and floor design, along with alterations to the rear wing endplate and brake ducts.

Norris admitted it took him some time to adjust after his MCL36 was changed between the two sessions.

Asked to quantify any gains, he suggested that the team had modest expectations of the new package.

“Not as much as what I would dream of,” he said of the improvement. “But I don’t think we expected a lot of it.

“We expected a small step. And it’s still too early to say, I’ve just driven it, and things feel different, some things a little bit better. And some things we’ve still got to optimise and figure out. But yeah , reasonably.

“I think Daniel had it this morning for FP1. So he’s understood a little bit more.

“I’ve still got to figure out a little bit how to drive the car, because it’s a little bit different in that regard.”

Asked if he meant the car felt trickier to drive, he stressed that the changes weren’t necessarily negative.

“Just different, I wouldn’t say trickier,” he said. “It’s just the feeling you get behind the wheel, you’re so sensitive, you get so used to things.

“As soon as something feels just a little bit off, you have to figure out why that’s happening and what it’s doing, what the reasoning is for it, and then how to overcome it and maximize it again.

“So I guess I’m playing a little bit of catch up and just trying to understand all of that, comparing to Daniel, but at the same time, it’s been good we’ve been able to compare data easily today, because we chose that strategy of me not having it, him having it.”

Norris made it clear that he was not worried about the porpoising that was evident on the MCL36.

“It felt like I had a decent amount,” he said. “The last few races we’ve had quite a bit at times, Silverstone we had a lot as well, so I’m not surprised. Not a shock. Yeah, I’m hoping it’s kind of a good thing that, if we can improve the car, sometimes that promotes porpoising.

“Apart from Red Bull, it seems like it’s what Ferrari and Mercedes have had a lot of, and they are obviously a lot quicker than us.

“But I think, as we’re trying to improve the car, sometimes we expose this phenomenon and yeah, it’s maybe not a bad thing. Sometimes it means you’re heading in the right direction.”

Ricciardo also said that he could sense a change in the car, following the changes for the French Grand Prix weekend, but was uncertain of how large the difference is.

“But we haven’t driven on this track yet as well with these cars, so the reference is to another track,” he said. “So I do feel some differences, but it’s not like a back-to-back test, if you will.

“I think we were kind of working through it. I think the afternoon we made a bit of progress, so that was better. But I think there’s still more to get out of it.”


Did you miss our previous article...
https://formulaone.news/mclaren/10-british-classic-cars-that-will-make-you-want-to-remortgage-your-house