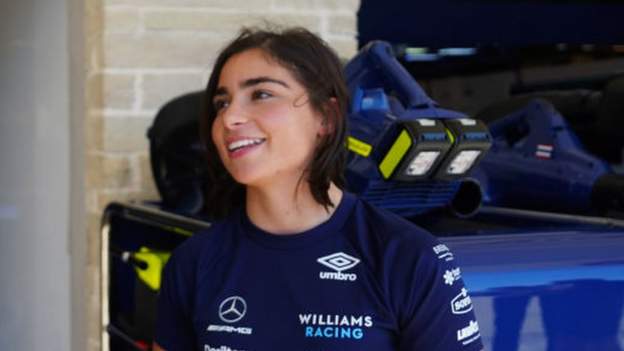 Jamie Chadwick on her move into Indy NXT with Andretti Autosport

Britain’s Jamie Chadwick will race in the United States’ Indy NXT series for the Andretti Autosport team in 2023.

The 24-year-old won her third W Series title in October after the final three races were canceled because of funding issues.

Indy NXT is the second tier of the USA’s open-wheel racing format IndyCar, which includes the Indy 500 oval race.

“My aim is always to challenge myself and continue my progression,” said Chadwick.

“This represents not only a big step up but also a big step towards my goal of competing in the highest categories of single-seater racing.”

Chadwick’s drive, in what was previously known as IndyLights, is a step up in speed from the W Series and includes 14 races – two of which are on traditional American oval circuits, notoriously tricky for drivers from Europe as they require a different style of racing .

She arrives with significant new funding for the season – from long-time F1 supporter DHL – after previous support did not materialize as hoped in 2020.

Britain’s Susie Wolff took part in an F1 practice session for Williams at the British and German GPs in 2014.

Chadwick said: “I’ve followed IndyCar over the years, and it definitely is something I’d love to race in. I’ve not looked that far ahead yet.

“But there’s other opportunities as well in the States – not just single-seater racing, but in sports cars, as well as Formula 2 and Formula 3 – with Formula 1 being the ultimate goal.

“But it’s important at this stage to focus purely on my development.”

Chadwick, who is a development driver for the Williams F1 team but does not drive the current F1 car, must amass 40 ‘super-licence’ points to qualify to compete in F1.

She currently has 15 from winning the 2021 W Series, but cannot earn any more points in the 2022 championship.

You can win a maximum of 15 by winning the Indy NXT title.

Andretti Autosport won the Indy 500 five times and the IndyCar championship four – twice each through Briton’s Dario Franchitti and the late Dan Wheldon.