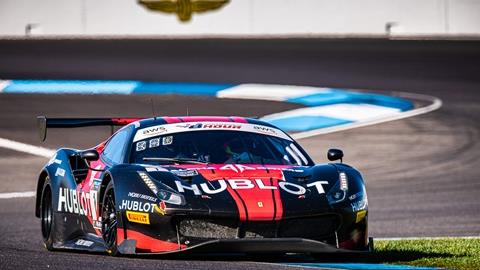 September 15, 2021 | At the Indianapolis Motor Speedway

Today’s question: Some of the most famous and impressive automakers, including Aston Martin, Audi, BMW, Ferrari, Lamborghini, McLaren, Mercedes-AMG and Porsche, will be on the Indianapolis Motor Speedway Road Course during the Indianapolis 8 Hour for October 15-17. compete in the Intercontinental GT Challenge Powered by Pirelli. Which of these car brands is your favorite?

Curt Cavin: I always prefer Porsche, but given the range in this area, I have to go for Ferrari (with particular interest in the 550 Maranello). A personal tour of the Ferrari factory in Maranello in 2002 remains one of the highlights of my professional career. Seeing Enzo Ferrari’s office in the quaint three-story white building – red shutters, yellow Ferrari flag – where Michael Schumacher stayed during the test days on the Fiorano circuit sticks in my memory. Incidentally, the house bears the number 27, an iconic number preferred by the great Gilles Villeneuve. Getting to know Schumacher over the years and watching the sea of ​​red-clad Tifosi go crazy at 1: 2 for the home team in Monza was the best for me.

Zach Horrall: I have an affinity for the McLaren brand and the sports cars they make, so I’m excited to see them hit the track at the Indianapolis 8 Hours next month. McLaren feels like a racing team first and foremost and a sports car brand secondly, and that’s what makes them so cool to me. Bruce McLaren formed his racing team in 1963, but it wasn’t until 1992 that McLaren released their first car, the McLaren F1. Then the company didn’t release another car until 2010. Their sports cars are even assembled in the same Woking headquarters where their F1 cars are produced. The brand known for papaya orange feels fast, representative and, above all, modern.

Paul Kelly: Well Curt, it’s pretty hard to compete with this Mike answer. (Should we call it a pen drop since we are writers?) I’m pretty adept with a BMW Z4 at a lot of racing video games, but I’ll turn to another German brand for my answer – Porsche. I worked with the German manufacturer during my 2014-16 sports car races between my two stints at INDYCAR and IMS and was more than impressed. The attention to detail in performance and precision engineering – and the silent, Germanic passion for excellence – from everyone at Porsche was so impressive. Porsche reminds me of the late, great drummer Charlie Watts of the Rolling Stones: there’s nothing excessive or flashy, but everything you need to kick your ass is there. I know that every sports car brand probably has the same qualities, but I’ve seen it first hand at Porsche, and that still resonates.