New details about the recent murder of three University of Virginia (UVA) football players by one of their former teammates are further distressing — .. 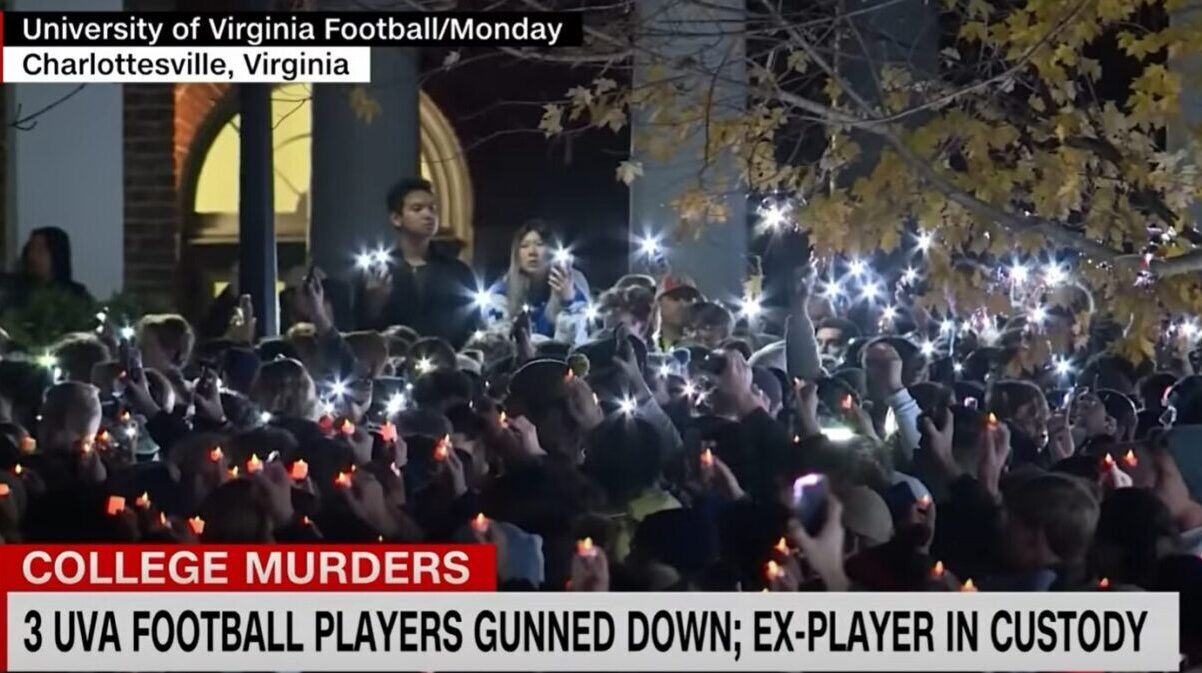 New details about the recent murder of three University of Virginia (UVA) football players by one of their former teammates are further distressing — including a witness statement that suspect Christopher Darnell Jones Jr. shot one of the players while he was sleeping. According to reports, UVA knew Jones had a gun conviction before the triple murder but never started a discipline process. My alma mater is reeling and canceled their last home game of the season. Yet the pundits of corporate media are laser-focused on one, predictable thing: gun control.

“Our dysfunctional relationship with guns rears its ugly head in Virginia,” was the title of The Washington Post’s Nov. 15 editorial. “It is important that the public not become inured to these tragedies. The nation has logged another gruesome episode in its dysfunctional relationship with guns,” declared the WaPo’s editorial board. The White House meanwhile called for a ban on so-called “assault weapons” (though the weapon seems to have been a handgun, not a modern sporting rifle of the kind smeared by the left as an “assault weapon”).

Some pundits sought not only to grind their axes over gun control, but to repudiate conservative attempts to curb the teaching of radical sexual ideology to children. “After Deadly UVA Shooting, Republicans Are Really Worried About … the Pride Flag in Schools,” was the title of a Nov. 16 editorial in The New Republic. “While too many parents — and politicians pretending to care about parents — have been busy conjuring manufactured crises over school curriculum, their children have been in training,” wrote Washington Post columnist Petula Dvorak in a Nov. 14 editorial that demanded more gun control. “Kindergartners have been cosplaying their own slaughter as their parents focused on trying to ban books that said ‘gay.’”

Yet pundits are leaving out quite a few important parts of the story, ones that point to other, deeper crises in our American social fabric.

According to a separate WaPo report, accused shooter Jones spent his early years in Richmond public housing complexes, “where it was often too dangerous to play outside.” Jones was primarily raised by his mother, who was forced to work evenings. The boy was regularly responsible for feeding his three siblings, even walking to nearby grocery stores to buy ramen noodles or bologna.

When Jones was 5, his parents divorced and his father departed the scene, a loss the former UVA football player called “one of the most traumatic things that happened to me in my life.” A close friend of Jones who was his teammate in middle and high school told the Washington Post: “He grew up in an unfortunate situation with his dad not being in his life too much and his mom not being the best off financially.” As he entered middle school, Jones’ relationship with his mother deteriorated, and by 2016 he was living with his grandmother in Petersburg, Virginia.

A broken family, an absent father, a strained relationship even with his mother—this was the harrowing life of Darnell Jones. He was mocked by other school children and struggled with anger issues. “He was ambitious, but his anger simply got in the way,” said one of his mentors.

A Culture of Broken Families and Absent Fathers

Jones’ story is not unique in 2022 America. About 41 percent of children are born to unwed mothers in the United States today. Approximately 1 in 4 children (about 18.3 million) lives without a father in the home, which is the highest rate of children living in single-parent households of any nation in the world. These statistics are direr for black Americans: About 57.6 percent of black kids are living absent their biological fathers.

There is overwhelming evidence that children of divorced or separated parents are more likely to suffer all manner of adverse psychological, emotional, and social effects. They are 1.5 to 2 times more likely to live in poverty and engage in risky sexual behavior as they get older. They have a lower probability of completing high school, a 12 percent lower probability of college attendance, and an 11 percent lower probability of college completion. A 2017 study found that children living in intact, nuclear families are about half as likely as children in step, blended, or one-parent families to have a mental disorder or require psychological help.

Might any of this explain Jones’ alleged behavior in that UVA parking garage? According to Marripedia.org, “the rate of violent teenage crime corresponds with the number of families abandoned by fathers.” Moreover, “the type of aggression and hostility demonstrated by a future criminal often is foreshadowed in unusual aggressiveness as early as age five or six.” As the saying goes, hurt people hurt people. And in America, we have a lot of hurt young people.

We Have a Much Bigger Problem Here

The kinds of laws that gun control advocates are calling for in response to the UVA shooting would almost certainly have had no effect on whether three people were shot and killed in Charlottesville on Nov. 13. If Jones is the perpetrator, he likely committed the act with a Glock he purchased in July, not a long gun that would fall in the category of what gun control advocates call “assault rifles.”

Moreover, Jones had a prior conviction for illegally possessing a handgun that something UVA had admitted it failed to report to a student-run judiciary committee. In other words, there were laws and school regulations already in place regarding Jones’ misuse of guns.

Unsurprisingly, gun control advocates seem little interested in the fact that their suggested legislation would not have stopped this shooting. Indeed, they mock conservatives who are trying to take action to address the dire mental health crisis among youth. Meanwhile, the left promotes a culture that undermines family stability and mocks men and encourages their infantilization.

More gun laws wouldn’t have stopped the UVA shooting, but the evidence shows a culture that promotes stable families with invested fathers would significantly reduce gun violence (and a host of other negative social indicators) in this country.

Casey Chalk is a senior contributor at The Federalist and an editor and columnist at The New Oxford Review. He has a bachelor’s in history and a master’s in teaching from the University of Virginia and a master’s in theology from Christendom College. He is the author of The Persecuted: True Stories of Courageous Christians Living Their Faith in Muslim Lands.