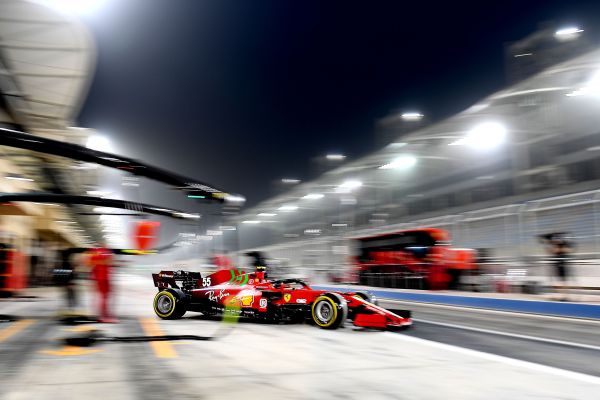 Scuderia Ferrari Mission Winnow drivers Charles Leclerc and Carlos Sainz, both drove the SF21 on the first day of the only 2021 pre-season test, that runs until Sunday. In total, the pair covered 115 laps (622,4 kms), split between 58 for the Monegasque in the morning and 57 for the Spaniard in the afternoon.

Morning. At 10 on the dot, Charles dove out of the pits onto the Sakhir track for a short first run with the car fitted with a rake, which helps gather data for the engineers on how the car is behaving. Then, after a quick check, Leclerc was back on track for some longer runs with the C2 compound, doing several laps in consistent conditions. He drove from 10 up to just before 2 pm, also running the C3 compound. 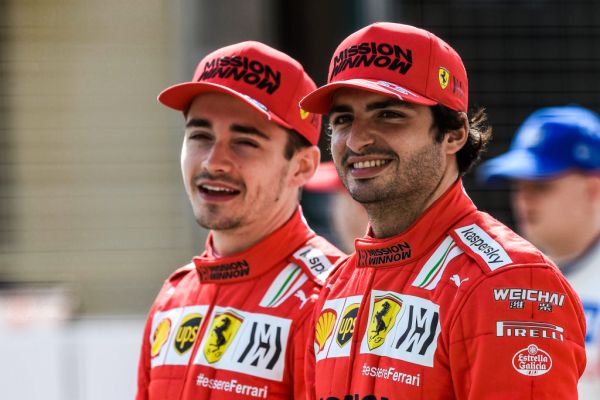 However with ten minutes remaining, he was instructed by the team to park the car at the side of the track because of an anomaly with the combustion spotted on the telemetry. He did 58 laps, or 313.3 kilometres, his best time being a 1’33”242.

Afternoon. The car then underwent the necessary checks and was prepared for Carlos who was thus able to make his debut at the wheel of the SF21 shortly before 16. Despite strong winds, limited grip and poor visibility, the Spaniard’s work programme was similar to that of his team-mate, running both the C2 and C3 compounds. Carlos completed 57 laps (308,5 kms), the best in 1’31”919.

Programme. On Day 2, the Scuderia will follow a similar programme to today’s. This time, Sainz will drive the first part of the day and Charles the second. 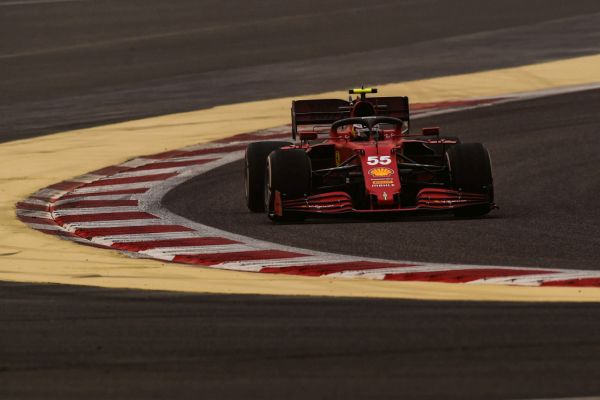 quote In general I think today was a positive first day of testing, where the target was to complete our whole run programme and we did it, so happy with that.

I guess everyone wants to figure out the performance of each car after today, but I think it is way too early to tell, and very difficult to know in these kind of conditions – full of sand, very windy and with big variations in temperatures.

All in all I think we can consider today a very good day. Thanks to everyone at the track and back at the factory. We keep working! 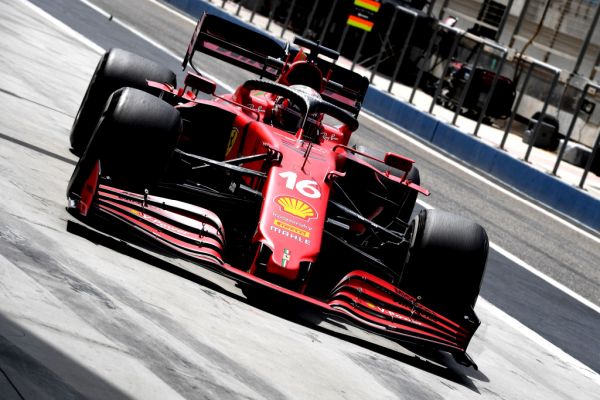 quote The first day in a new car is always very interesting, after all the work carried out over the winter. We completed the whole programme without any major problems and the first impression of the car is pretty good.

But obviously, it’s far too early to give a full assessment. Now I can’t wait to get behind the wheel again tomorrow!

12.03.2021 Alpine F1 Team began its on-track preparations for the 2021 FIA Formula 1 World Championship today with Esteban Ocon at the wheel of the A521 at the Bahrain International Circuit. On a sandstorm-hit day in Bahrain, Esteban recorded 129 laps, more >> Bahrain Formula1 pre-season testing afternoon classification – Verstappen ahead of Norris and Ocon

12.03.2021 Ahead of the 2021 FIA Formula One World Championship, the Williams Mercedes FW43B took to the track this morning for pre-season testing at Bahrain’s International Circuit. The team’s Development Driver, Roy Nissany was behind the wheel, with Williams race more >> Honda Powered F1 Cars Start Pre-season Testing in Bahrain

gets underway, all the teams are taking part in a three-day test that starts today at Bahrain International Circuit in Sakhir. Once again this year, Honda is supplying four drivers and two teams, Scuderia A more >> McLaren F1 2021 Formula 1 pre-season testing preview

11.03.2021 All you need to know about three days of testing in Bahrain
They say that if you can answer every one of these questions about a topic, you’ll have a clear understanding of it. So, with Formula 1 pre-season testing set to be a little differ more >> Formula 1 testing in Bahrain – how to watch, livetiming

09.03.2021 DAMS’ Roy Nissany will debut Williams’ 2021 Formula 1 machine during the upcoming pre-season test in Bahrain, as part of his role in the team’s academy programme. The Israeli is currently enjoying more >> Mick Schumacher thoughts on Bahrain F1 pre-season test

Walking into the paddock in Bahrain as one of the 20 drivers competing in Formula 1 this season – it’s obviously the realization of a dream and a significant moment in your career, but is it more >> Uralkali Haas F1 Team Heads to Bahrain

08.03.2021 Rookies Nikita Mazepin and Mick Schumacher Set for Pre-SeasonHaving unveiled the livery for the VF-21 it will campaign throughout the 2021 FIA Formula 1 World Championship last week, Uralkali Haas F1 Team now travels to Bahrain this week for three days of pre-season testing a more >> Pirelli to test 2022 18-inch F1 tyres for 28 days this year

01.03.2021 Pirelli plans to undertake 10 test sessions totalling 28 days this year with nine Formula 1 teams in preparation for the 2022 season, which introduces new technical regulations along with a move to 18-inch tyres.

This, of course, is subject to any restrictions more >> Mick Schumacher reunited with SF71H at Fiorano

29.01.2021 Mick Schumacher was back behind the wheel of the SF71H today, 120 days on from his first drive in the car. That took place at a test on 30 September 2020, when he drove the 2018 car on the same day as fellow Ferrari Driver Academy members Callum Ilo more >> Over a hundred laps for Carlos Sainz at the Scuderia Ferrari F1 car, quotes

28.01.2021 Carlos Sainz starts his adventure with the Scuderia: over a hundred laps for the Spaniard at FioranoAt 9.30 the shutters rolled up on the pit garage at the Fiorano track and a minute later Carlos Sainz was out for his first lap at the wheel of a Ferrari F more >> Marcus Armstrong tests Ferrari

26.01.2021 New Zealand driver Marcus Armstrong fulfilled a lifelong dream this week when he tested for Scuderia Ferrari. The Kiwi was one of seven set to test in a 2018 car at Ferrari’s F1 test circuit, Fiorano.  He is the first NZ driver ever to join the Ferrari Driver Acad more >> Scuderia Ferrari takes to the track tomorrow for 5 day test with 7 drivers at Fiorana

24.01.2021 The start of the Formula 1 season is not far off and Scuderia Ferrari is firing up the engines for five days of testing at the Fiorano track, involving seven of the Maranello marque’s drivers. They include race drivers, Carlos Sainz and Charles Leclerc who make up the team’s youngest pairing since 1968. more >> Scuderia Ferrari:First official F1 run for Shwartzman, Fuocos Sim-to-track compare, Ilott the new test driver

15.12.2020 Abu Dhabi Test The 2020 Formula 1 season is finally over. It has been one of the most compressed, with just 163 days separating the first race in Austria on 5 July and today’s test. It is also the first time since the Sixties that the last race of more >> Aston Martin Red Bull Racing Abu Dhabi test with Vips and Buemi

15.12.2020 Renault DP World F1 Team concluded its 2020 on-track season at the post-Abu Dhabi test with Fernando Alonso and Guanyu Zhou at the wheel of the Renault R.S.20s at Yas Marina. It was a productive day on both sides of the garage – Fernando accumula more >> Williams F1 Abu Dhabi Young driver test with Aitken and Nissany

15.12.2020 F1  Post season testAbu Dhabi 2020Yas Marina CircuitMercedes, Ferrari, Red Bull, Renault, AlphaTauri, Haas, Alfa Romeo and Williams will all be in action on track, on what is the last official day of F1 running in 2020. M more >> Juri Vips and Sébastien Buemi set to drive in post-season test

09.12.2020 Vips, who joined the Red Bull Junior Programme in 2018 after a title-winning charge in the German Formula 4 Championship, went on to finish as runner-up at the Macau Grand Prix in 2019 and in a 2020 season disrupted by the global pandemic scored his first FIA Formula 2 podium at Mugello during an eight-race cameo in the F1 feeder series.
more >> 2021 Pirelli tyre test Abu Dhabi

09.12.2020 On Friday the teams will get the chance to run Pirelli’s 2021-specification tyres in Abu Dhabi, as was previously the case in FP1 and FP2 in Bahrain on November 27. These tyres were tested during FP2 in Portimao on October 23, and subsequently ho more >> Marino Sato to drive for Scuderia AlphaTauri at the Young Driver Test

09.12.2020 Scuderia AlphaTauri will field an all-Japanese line-up for the Abu Dhabi Young Driver test, with Marino Sato now confirmed to drive alongside Yuki Tsunoda at the Yas Marina Circuit on 15 December.Sato finished his first season of the FIA Formula 2 Championship, more >> Zhou and Alonso to test for Renault DP World F1 Team in Abu Dhabi

03.11.2020 Renault Sport Academy’s Christian Lundgaard, Oscar Piastri and Guanyu Zhou all took to the Bahrain International Circuit last week as the trio each had a turn at the wheel of the Renault R.S.18 Formula 1 car as part of their young driver development programme. more >> Renault Sport Academy drivers to test F1 car in Bahrain

22.10.2020 Renault DP World F1 Team is pleased to announce three of its current Renault Sport Academy squad will further their understanding of F1 with a run in the Renault R.S.18 at the Bahrain International Circuit later this month. The four-day R.S. more >> Vettel and Leclerc about testing in Mugello

24.06.2020 Sebastian Vettel and Charles Leclerc were back in action for Scuderia Ferrari Mission Winnow during a test day using the 2018 car at the Mugello circuit. Its purpose was for the drivers to get back in the swing of driving again and for the whole team to work on the new anti Covid-19 protocols. more >> The post Scuderia Ferrari – 115 laps on the first day of testing with the SF21 for Leclerc and Sainz first appeared on monter-une-startup.