Red Bull only put out a special paint job for one Turkish Grand Prix race this weekend to honor engine supplier Honda, who will be leaving Formula 1.. 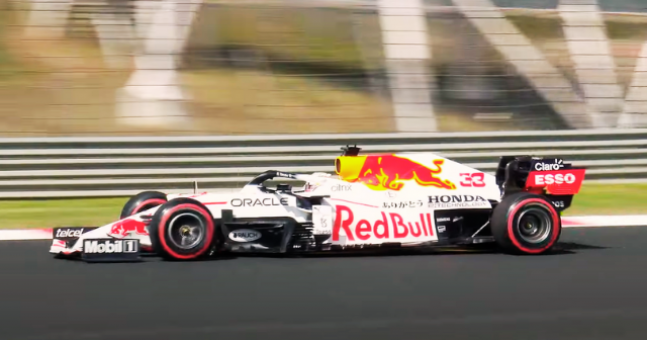 Red Bull only put out a special paint job for one Turkish Grand Prix race this weekend to honor engine supplier Honda, who will be leaving Formula 1 at the end of the year.

The new Red Bull look is a bit dazzling, but is it the best single paint job in F1 history?

Red Bull is in an all-time title fight in 2021, with top driver Max Verstappen taking on perennial record breaker Lewis Hamilton for a first title.

However, they have already won a category this year as they brought out stunning one-off livery for the Turkey GP this weekend. This weekend a visit to F1 in Japan was originally planned, the home country of Red Bull’s engine supplier Honda. To thank Honda for their service to the team over the past three years, Red Bull’s livery is inspired by the Japanese racing colors white and red.

It looks even better out on the track than in the pre-race promotions, and if Verstappen or teammate Sergio Perez can take a win on Sunday, it will be even better known in F1 lore.

The 2019 German Grand Prix marked 125 years of Mercedes motorsport participation and they decided to celebrate the occasion with a retro paint job at their home Grand Prix.

The team opted for a “scratched” design that gradually shifted from the regular 2019 paint job to a sleek white nose and wing on the front of the car, in order to evolve the team from its pure white roots to the famous “Silver Arrows” to symbolize “.

However, it is unfortunate that the car is best remembered because it has been part of Mercedes’ most edgy weekend lately. Lewis Hamilton went off the track twice, spending a full minute in the pit lane after hitting the wall and eventually finishing ninth after starting first while teammate Valtteri Bottas was eliminated after a crash.

** Germany 2019 has entered the chat ** pic.twitter.com/putnDaPEQx

Red Bull hopes their white livery will bring them more luck this weekend.

Red Bull isn’t the first team to show off a special paint job this year – and McLaren’s Monaco performance this year was a beauty in itself.

McLaren will celebrate its historic partnership with @GulfOilIntl by racing in a one-of-a-kind Gulf livery over the # MonacoGP weekend. #GulfXMcLaren

McLaren and Gulf Oil have been working together for a long time, and the latest partnership between them was announced in July 2020. To celebrate the return of Monaco after a year on the calendar, McLaren chose to host the iconic race in a livery inspired by their two originals, race colors and the traditional Gulf livery.

The result was a stunning light blue and orange look that really stood out on the track.

This got much more mixed reactions – although that might have something to do with the circumstances under which Ferrari brought it out.

To celebrate its 1000th Formula 1 race last year, Ferrari launched a special paint job in the original colors of burgundy and yellow. The Grand Prix on home soil in Tuscany should have been a special event in Ferrari history.

But in the midst of a shocking, winless season and against the background of the departure of four-time world champion Sebastian Vettel, it seemed ridiculous for Ferrari to celebrate.

A small cheat here, as it was used for two races, but Ferrari’s livery for the US and Mexico Grand Prix 1964 was hard to believe today.

As Will Buxton famously said in Drive to Survive, “Ask a child to draw a racing car and they will paint it red.” Ferrari cars are painted red, and that’s just a generally accepted fact – that is, with the exception of the last two rounds of the 1964 championship.

In true Enzo Ferrari fashion, he has been involved with the Automobile Club d’Italia since the Italian Grand Prix in Monza. After handing in the registration license for the Ferrari team, Enzo’s cars were used in blue and white rather than the iconic red that the Scuderia is synonymous with.

#AdilsAutoHistory #AutoMotion Were all Ferrari F1 cars scarlet? Think back to 1964 after Enzo Ferrari used his F1 cars for the Mexican and US GPs in NART’s white and blue colors, as shown by this 1: 8 scale model! pic.twitter.com/OwEczeFTf9

It remains the only time in F1 history that Ferrari has driven in a color other than red.

Fernando Alonso returned to Formula 1 this year after a two-year absence with Alpine – and the end of his first career in sport celebrated his career in a special livery.

Most of the F1 paddock assumed that Alonso would retire from the sport when he announced his departure from McLaren in late 2018 – although Sebastian Vettel correctly predicted the Spaniard would be back at the time.

To mark the career of the two-time world champion, McLaren painted the rear of the car in the colors of Alonso’s crash helmet.

So we may be biased here, but the small addition to the Jordan cars for the 1994 French Grand Prix was an excellent grade.

The race at Magny-Cours was the first GP since the start of the USA in ’94 – and Eddie Jordan decided to replace the sponsorship of “Visit Ireland” with a clear message to the country which Ireland famously beat at this world championship.

Red Bull itself is the master of a one-off paint job, so we’re not even sure if Turkey’s performance this year is balanced your best single painting.

There was a time when Red Bull came to the test every year in a new “Dazzle Camo” look. The paint job was designed to hide elements of the car that other teams might copy or take inspiration from. The 2015 attempt was the classic, but more colorful paintwork followed in the years to come.

What do you think of the new Red Bull “Testing” paintwork?

According to Red Bull, this is a “one-time” paint job – not sure if this is just for testing or just for 2019. # F1 pic.twitter.com/HRKOW5Edj2

Red Bull also showcased special racing liveries to celebrate the releases of Superman Returns and Star Wars – Episode III: Revenge of the Sith, so they are undoubtedly the kings of a special F1 livery.

However, is Turkey’s performance this year their strongest? We have to say we believe that the Red Bull cars have never looked as good on the track as they did this weekend.