The Crypto Bowl Will Not Be Returning For Super Bowl LVII 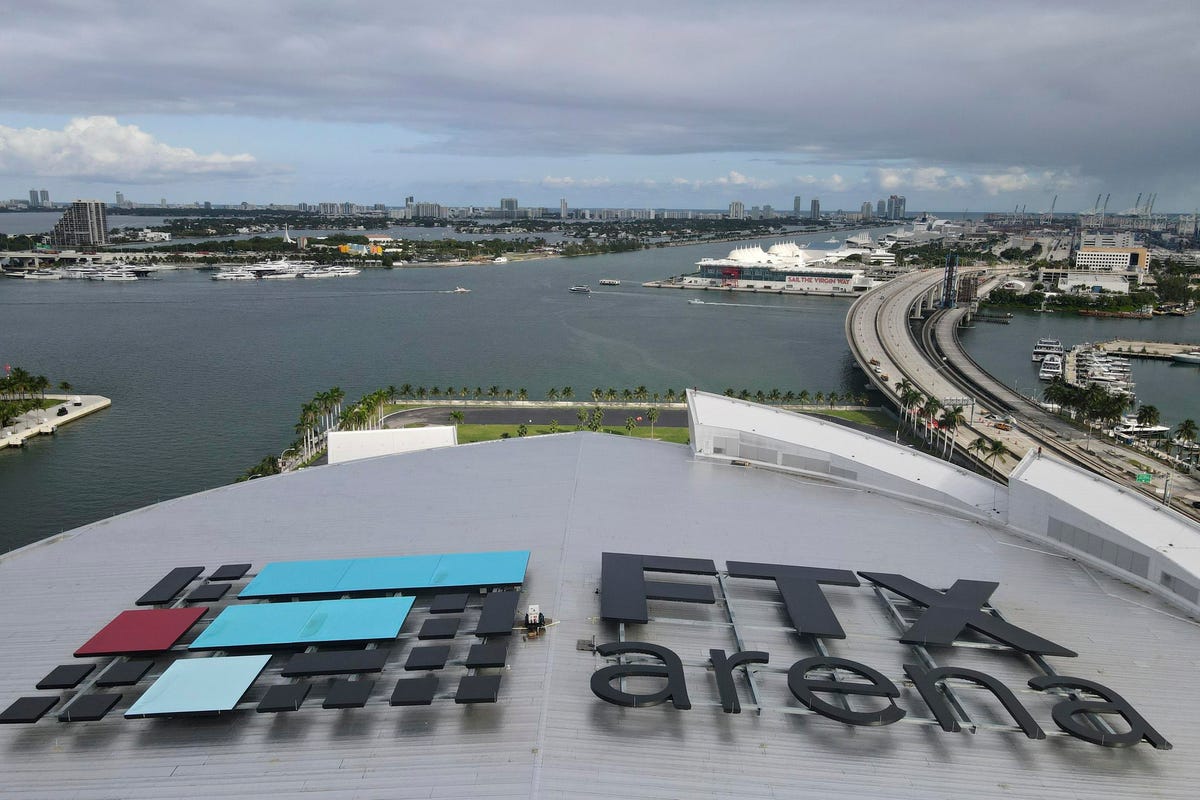 In this photo taken with a drone, the FTX logo is seen on the roof of the FTX Arena on Wednesday, … [+] Dec 7, 2022, in Miami. The home court of NBA’s Miami Heat has since been renamed the Miami-Dade Arena (AP Photo/Rebecca Blackwell)

Every year the Super Bowl is the most watched program and the most expensive for advertisers. Last year’s Super Bowl averaged 99.2 million viewers with a price tag of $6.5 million for a :30 ad. The games were dubbed the “Crypto Bowl”, with four cryptocurrency advertisers FTX, Coinbase, Crypto.com and eToro invested a reported $54 million for the “Big Game”.

Since last February, however, the valuation of many cryptocurrency companies has dropped. Last November FTX, a category leader, went from a $32 billion company with a big marketing budget to filing for Chapter 11 four days later. Other Crypto Bowl advertisers have also been struggling with layoffs and cutting back on their marketing budget. In all likelihood, viewers will be watching few, if any, cryptocurrency ads in next month’s Super Bowl.

The Crypto Bowl reminded many of the 2000 Super Bowl which has since been referred to as the “Dot-com Bowl”. That year 17 of 61 ads sold came from dot-com companies with a :30 ad costing $2.2 billion. Most, but not all, of those advertisers are either no longer in business or were acquired by another company. Perhaps the most famous (or infamous) ad was the sock-puppet from Pets.com singing “If you leave me now”. Pets.com declared bankruptcy just months after the Super Bowl. By comparison, the 1999 Super Bowl ran just two dot-com ads and in 2001 only one dot-com advertiser returned E*Trade.

So why do advertisers in a potentially precarious financial situation invest in the most expensive TV program? Berlin Cameron’s Founder and CEO, Ewen Cameron says, “In my opinion there are two powerful thought processes that drive small, ambitious brands to spend disproportionately vast sums of money on Super Bowl commercials, and I suggest both are deeply flawed.”

Cameron continues, “First, is a kind of ‘business school wisdom’ that views market potential as singularly about getting to scale as fast as possible. This idea, strangely enough, is Marxist in its simplicity; the point of a business is to dominate its market, sweeping up all competition. The fastest way to do that is to drive massive awareness and trial through the biggest media event – the Super Bowl. Of course, this strategy can work, it was hugely successful for our client Vitaminwater over a decade ago, as the advertising created the momentum to drive the brand into mainstream adoption, creating a challenge to ‘big soda’ resulting in the highest value acquisition of a soft drink ever.”

Cameron adds, “The second reason is demonstrating you are a serious and viable business by rubbing shoulders with ‘The Super Bowl Club’. For some fast-growing companies, this can be an important way to bolster the confidence for their investors, or indeed to create an impression that will resonate with their potential next round of fundraising, but it can also be human hubris, a kind of self -serving statement of arrival. The irony of the devastation we have seen to last year’s ‘Crypto Bowl’ advertisers such as FTX, Crypto.com and Coinbase, is that crypto was created as an alternative to centralized monopolistic currencies and business strategy. The promise of a new, more democratically distributed means of success and independence. That promise in my opinion is still very real, but so is the opposing power of conventional thinking and the human instinct to spike the ball before the ref has called ‘touch down.’”

To refresh your memory here are the four cryptocurrency ads from last year’s Super Bowl.

Coinbase: One of the more critically acclaimed Super Bowl ads last year came from Coinbase; the retro :60 ad consisted of a QR code as a familiar screen saver accompanied by a 1990s audio track. The code actually connected the user to a sign-up promo with the opportunity to win a $3 million giveaway. Afterwards, Coinbase said they had 20 million hits on their website in the first minute after the ad ran. The ad ranked among the five most-discussed brands on Twitter and also won a Direct Grand Prix at Cannes.

Crypto.com: The ad features basketball great LeBron James going back in time to meet his 19-year self (in 2003). James provides his younger self with some advice by saying, “If you want to make history, you got to call your own shots.” The ad does not mention Crypto.com, but their tagline, “Fortune favors the brave” is used. Matt Damon also uses the catchphrase in another (non-Super Bowl) Crypto.com ad.

FTX: The ad featured Larry David going through history naysaying such inventions as the wheel, fork, toilet, coffee, light bulb, dishwasher, going to the moon, portable music and finally cryptocurrency. The ad ended with David saying, “Ehhh, I don’t think so – and I’m never wrong about this stuff.” Followed by the tagline, “Don’t be like Larry—Don’t Miss Out”.

EToro: The ad features persons typing in “Crypto? sticks? Where to start?”, the song “Fly Me to the Moon” begins to play as people are floating in the air with the tagline “The Power of Social Investing”.

Atit Shah, Chief Creative Officer, Digitas notes, “No matter how disruptive or progressive an upstart’s vision may be, there seems to be a gravitational pull, a human yearning, to be in the same high-wattage spotlight as the well-established game day gang of beers, cars, tech giants, and snacks Some may see this costly move as a daring declaration of a brand’s arrival… others as 100% blind ambition. Time will tell, but as an aside you can’t help but admire some of the creativity on display, from Larry David’s hilarious FTX spot to the app-crashing QR code by Coinbase last year.”

Over the past two years, spending for the four cryptocurrency advertisers has followed a classic bell curve. According to national TV ad spending data supplied by iSpot in February 2022 (when Super Bowl LVI was televised), FTX, Coinbase, Crypto.com and eToro reached a high water as estimated ad spending reached $84.3 million. Over the last six months of 2022 the four companies invested only $8 million in TV ads, slightly more than the cost of one Super Bowl ad.

Over the last couple years, cryptocurrency brands used TV to borrow its broad reach and sense of brand safety and legitimacy — especially during major sporting events,” said Cassandra Arora, Chief Marketing Officer, iSpot. “If these marketers are coming back to TV again despite significant pressures on crypto, it likely means those outer funnel activities were effective, and they can now focus more heavily on lead generation.”

The Super Bowl ads and other marketing strategies did help to build awareness. A survey from Pew Research released last August found 88% of Americans have heard at least a little about cryptocurrencies, including 26% who have heard a lot. In addition, 16% of Americans have at some point invested in, traded or used a cryptocurrency. At 42%, Pew found crypto investments were highest among men aged 18-to-29, compared to 17% for females of the same age group.

FTX: In 2021 FTX reached a 19-year, $135 million agreement with the NBA’s Miami Heat to rename their home court FTX Arena, from American Airlines Arena. Earlier this month, in the aftermath of FTX bankruptcy declaration, it was renamed the Miami-Dade Arena. Furthermore, FTX also had a marketing agreement with the Golden State Warriors. In November, an FTX customer sued the defending NBA champions for fraudulently promoting the bankrupt crypto company.

Since June 2021 Major League Baseball umpires have been wearing an FTX patch on their uniforms which is expected to end. In addition, the University of California at Berkeley football stadium will no longer be called FTX Field at California Memorial Stadium, ending the 10-year $17.5 million agreement begun in August 2021. Also, TSM, one of the largest esports companies, has suspended their $210 million deal with FTX.

Crypto.com: In 2019 The Staples Center home court NBA’s Los Angeles Lakers (with LeBron James) became Crypto.com Arena. Crypto.com paid $700 million over 19 years or the naming rights. Crypto.com was also a sponsor of the 2022 FIFA Men’s World Cup from Qatar. (The World Cup began just days after the collapse of FTX.) Besides FIFA, Crypto.com has marketing agreements with a five-year $100 million deal with F1 racing. The deal included title sponsorship of the F1 race in Miami. So, FTX sponsored the Aston Martin F1 Team.

Crypto.com reached a six-year deal to have a patch on the uniform of the NBA’s Philadelphia 76ers. Moreover, they have a ten-year $175 million branding deal with UFC and an agreement with Italy’s soccer league Serie A. Furthermore, Crypto.com came to a five-year sponsorship agreement with the Australian Football League valued at $18 million.

Coinbase: In 2021, the NBA, in its 75th season, struck a cryptocurrency agreement with Coinbase. The deal allows the cryptocurrency company to the NBA and such affiliated leagues as WNBA, NBA G League, NBA 2K League and USA Basketball.

eToro: eToro has a number of global sports sponsorships in soccer leagues including England’s PremierPINC League, Germany’s Bundesliga and Italy’s Serie A along with Australia’s Rugby League and other sports marketing initiatives.

Besides Larry David, FTX signed up a number of famous names endorsing their crypto exchange. For example, in an FTX ad Tom Brady and his then wife Gisele Bundchen encourage people to invest in cryptocurrency. In 2021, Brady had acquired stock in FTX while becoming a “brand ambassador”. The quarterback is among several high-profile athletes and celebrities including Stephen Curry, Naomi Osaka, Trevor Lawrence, Larry David, Shohei Ohtani and Shaquille O’Neal that endorsed FTX in ads and is now involved in a class action lawsuit for misleading consumers.

Other crypto exchanges that advertised in the Super Bowl have also been cutting back. After announcing a hiring freeze, Coinbase, in June, laid off 18% of its personnel. Management cited the company had grown too quickly and needed to manage expenses. Seven months later, Coinbase, in an attempt to cut costs, announced another round of layoffs impacting another 20% of personnel (950 employees). Two years ago, Coinbase had a workforce of 1250.

Also, last June, Crypto.com announced a cutback of 20% of its personnel impacting 250 workers. Earlier this month the cryptocurrency company announced an additional cutback of 20% to its global workforce, citing economic headwinds and unforeseeable industry events. In July eToro announced a reduction of 6% of their workforce, laying off 100 personnel.

As viewers sit down to watch Super Bowl LVII next month, they will see the typical beer ads, soft drinks ads, snack food ads, car ads, movie ads and even sports wagering ads, some will be endorsed by “A=list” celebrities . Rihanna wants to headline an entertaining halftime show. With a :30 ad costing $7 million however, Super Bowl LVII will not be Crypto Bowl II.