One of Verstappen’s best drives in F1. Starting from 10th on the grid, the reigning F1 champion made the most of Red Bull’s aggressive strategy to.. 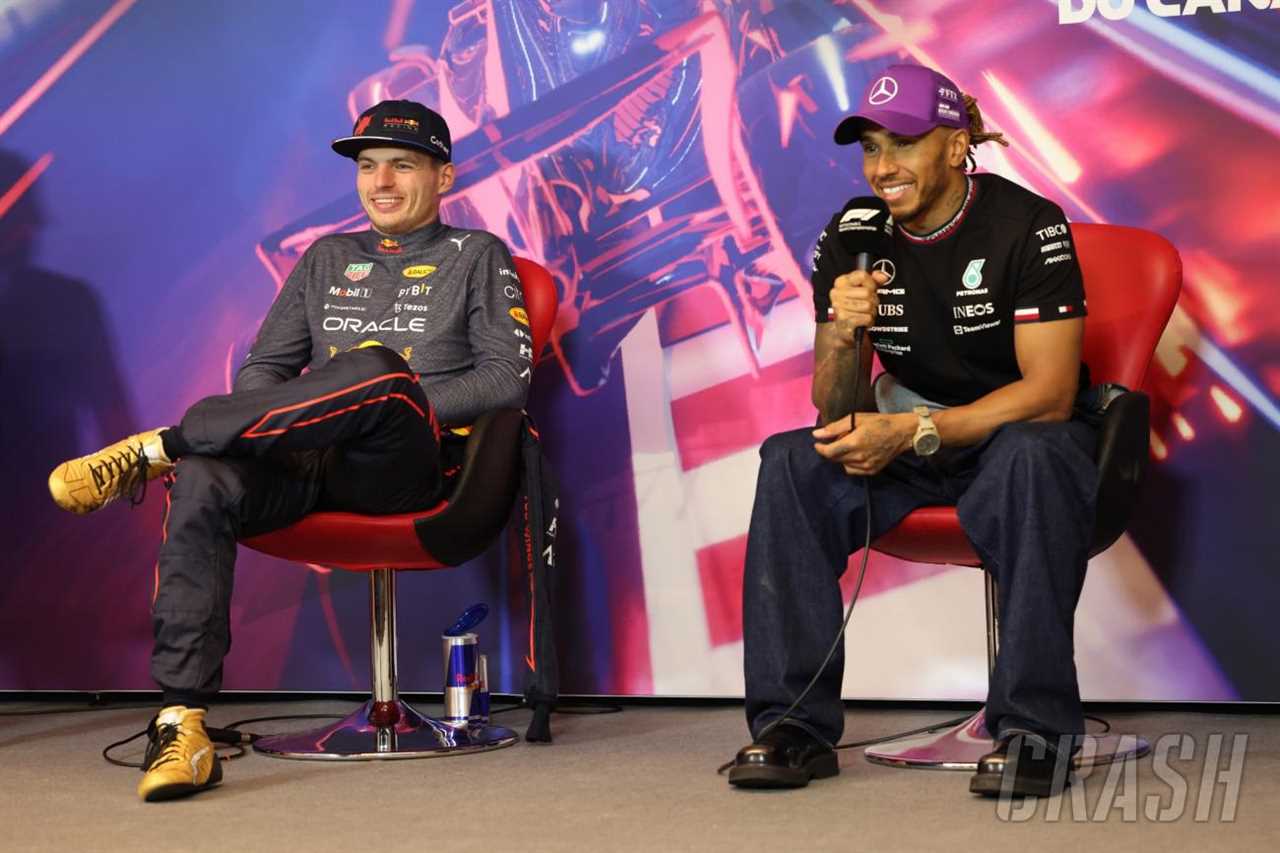 One of Verstappen’s best drives in F1. Starting from 10th on the grid, the reigning F1 champion made the most of Red Bull’s aggressive strategy to start on the softs before switching to the mediums at his next two pit stops. While it wasn’t a completely perfect race – he did a 360-degree spin – in the grand scheme of things, it was a mighty drive from the Dutchman who is now 80 points clear in the standings.

A DRS issue in qualifying put Hamilton out of position on the grid. From then on, it was a slow burner for Hamilton but at the halfway point, he was the fastest man on track. Again, when he switched to the softs, Hamilton was impressive, overtaking Sainz and Russell on his way to finishing second – his fifth consecutive podium finish of the season.

Russell was the star of qualifying as he secured his maiden pole position ahead of the two Ferraris. The young Brit led from the front on the softs before relinquishing the lead on track to Leclerc. Russell’s race pace lacked compared to Verstappen, Leclerc and his teammate. Russell was overtaken by Hamilton in the closing laps but it was still a great weekend overall.

Sainz managed to out-qualify his teammate but his race pace was disappointed. While Ferrari’s strategy wasn’t optimal, he was overcut by his teammate before losing out to both Mercedes drivers. Without the VSC, Sainz probably would have been challenged by Perez on the final lap.

Perez was knocked out in Q2, continuing his recent run of struggles. Race day was better for Perez as the Mexican came alive in the final stint of the race. Qualifying and the first half were very lackluster which is reflected in his rating. A timely summer break to get his season back on track.

Yet another missed opportunity for Leclerc, whose title chances surely are all but over now with an 80-point gap to Verstappen with nine to go. Leclerc was brilliant in overcutting teammate Sainz through the pit stop phase before overtaking pole-sitter Russell on track.

Norris continues to have a very impressive season for McLaren. He extracted the maximum from the car over one lap, securing fourth on the grid. Naturally, the top three teams are simply too quick, comfortably finishing ahead of the two Alpines.

Alonso was once again the quicker of the two Alpines on race day but he didn’t have it all his own way. The two-time champion was fuming after Ocon defended aggressively at the start, forcing Alonso to back out, ensuring he didn’t get put in the wall. The hard tire was an awful call from Alpine but regardless, it’s unlikely he’d have finished any higher on a better strategy.

Ocon left it late in Q3 to top his teammate despite trailing Alonso for most of the weekend. The Frenchman was aggressive at the start before settling in ahead of his teammate. Ocon ultimately lost out in the closing laps as he struggled for pace, with the DRS being disabled saving him from a fast-charging Vettel.

Vettel secured the final point on the weekend he announced his retirement from F1. He was fortunate to beat his teammate, relying on an incident and team orders to ultimately get ahead as Stroll struggled with his softs in the closing laps.

Stroll would have finished 10th had it not been for his contact with Ricciardo. He was forced to move over for Vettel as his tires degraded but he managed to out-qualify his teammate and should have beaten him with a bit more luck.

A solid recovery given that he started from the pit lane after changing his power unit. AlphaTauri simply didn’t have the pace so any better than 12th was unlikely due to his lowly start position.

Points were on the table for Ricciardo but a tangle with Stroll dropped him down the order. The Australian struggled on his hard tires out of the pits, understeering into the Aston Martin as a result. A clumsy incident to top off another poor weekend for Ricciardo.

Running without the new Alfa Romeo floor, Zhou did well to get within a tenth of Bottas in Q2. Like his teammate, Zhou made a shocking start, dropping down to 17th. He recovered well, running behind his teammate but struggled for grip on the hards, stuck behind the Haas of Schumacher.

Schumacher made a great start from 15th, running in 12th in the early phase of the race. Haas simply didn’t have the pace as he dropped off from the leading 10 cars, holding up Bottas in the future. Schumacher was one of the few drivers that tried out the hards and that ultimately proved to be the wrong decision.

A respectful weekend for Albon in Hungary. He once again out-qualified his teammate and ran a subdued race to split the Haas pair.

Another collision on the opening lap meant Magnussen was forced to stop early for repairs. Even so, judging by Schumacher’s pace and Haas putting him on the hards, points were never on the table for the American outfit.

Latifi’s highlight of the weekend was going quickest in FP3 in the wet conditions. Unfortunately for the Williams driver, the rain didn’t return as he slumped to last on the grid even though he was quickest in sector one. An anonymous race performance for the Canadian.

After Tsunoda managed to out-qualify Gasly, the race didn’t go to plan for the Japanese driver as he had an unfortunate spin at the Turn 7 chicane. Tsunoda came home last of the classified runners, two laps down.

Alfa Romeo put Bottas on a one-stop strategy but the aforementioned hard tires were simply too slow, dropping from 10th to 12th as he was overtaken by both Aston Martins. He was the only retirement, pulling off with a couple of laps to go.